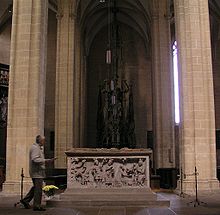 The late, and much missed Edward Stott, in his unforgettable lecture “French Thirteenth-century Cathedral Architecture and Egoism”, delivered to a select audience far from the madding crowd in the calm oasis of an old farmhouse in rural Normandy, illustrated an old theme- how a noble human impulse can so quickly become distorted. In this instance, to erect a great church, not to the glory of our Creator, but to build a higher cathedral than the one which, somehow or other, those nobodies in that dull town down the road from us managed to put up… an impulse culminating in the collapse of the nave of Beauvais Cathdral. Am I prejudiced because I happen to share the opinion of the lecturer? Perish the thought..

And what, you may wonder, has this to do with Harry Potter, whom no visitor, casual or other, can forget on entering the portals of Kings Cross? We shall see- as the blind man is reputed to have said.

The point is (it is now being gently approached) that if a church was built later than the thirteenth century, it will rarely be of interest to the discerning eye (though there are a few exceptions, such as the late Gothic nave added to Karl the Great’s octagonal 800AD Cathedral at Aachen, and the “lantern” at Ely). So when Harry Potter and his son Albus Severus climbed the little hill at the side of the Cathedral square in Erfurt, prominently on the top of which are two churches side by side, dominating the market in the square below, Harry- unfortunately unable to attend Ed’s lecture, but apprised of its contents- was at first more interested in the view back down to the market in full swing than in the buildings. Did he know. or was it by chance? Does chance exist? Or was it synchronicity, that he happened to glance and see to whom the large church next to the Cathedral was dedicated….. St. Severus?

Severus, Harry told his son, was born in a poor family in Ravenna in 250AD, uneducated, and became a weaver. In 283 the Bishop of Ravenna died, and there was great excitement and expectation, because Ravenna had an extraordinary tradition- a white dove would descend onto the head of the man chosen by God to be the next Bishop. Severus somehow wanted to attend, and though mocked by his wife, went to the gathering of the church dignatories, hiding behind a door. And Lo, a white dove descended on the head of Severus. He tried to shoo it away, but it returned a second, and then a third time. Acclaimed as Bishop, he astonished the congregation even more by delivering a wonderful sermon. He shielded his flock as best he could from the persecutions of the Emperor Diocletian until, in 313, the Empire became Christian. In 341 he attended a Synod at Serdica concerning differing views about the nature of Christ. After holding a last mass, he descended into the family vault and died in 381, aged 98. The Archbishop of Mainz brought his earthly remains to Erfurt in 838.

Albus Severus did not listen very well, though he liked the bit about the white dove; then they went into the church, and saw the tomb.

“But you know, Albus, I think this St Severus was really too good. Severus Snape was very, very brave, and loyal, but all the same….” “ You can’t be good all the time, can you?” said Albus, unwittingly echoing what the owner of the Normandy farmhouse where Ed gave his lecture, had said when just five years old. Yes, who can be good all the time?

Was the half-blood Prince perhaps christened after another St Severus, born in 465, who studied in Alexandria, and became Patriarch of Antioch? At that time, arguments were continuing to rage (alas. it is the appropriate word) everywhere in the church regarding the exact nature of Christ. Did he have two natures, or one? Was he human, or divine? A church Council at Chalcedon (451 AD) had tried to define it once and for all, but its formulation was not accepted by everyone. This St Severus and others in what are now known as the “Oriental Orthodox” churches, rejected Chalcedon and were subject to imperial persecution, often the result of political Church intrigues. In 518 he was exiled and took refuge in Egypt. Later he was able to return, but at a Synod held in Constantinople in 538, he was condemned as a heretic and anathematised. With the help of the Empress Theodora he managed to escape, and ended his life as an exile in Egypt. He had remained faithful to his understanding that Christ had two natures, but that in Him, the two natures were united.

It seemd odd to Harry that both these saints could not help but be involved in bitter conflicts in the church, and it seemed more appropriate to him that Severus Snape was named after the supposedly heretical St Severus, rather than the so-saintly one from Ravenna, or a whole of host of others (Saints Severus of Avranches, or Barcelona, or Gaul, or Naples, or Reims…. ) But how on earth did the parents of the half-blood Prince come by the name?