by Moazzam Begg with Victoria Brittain 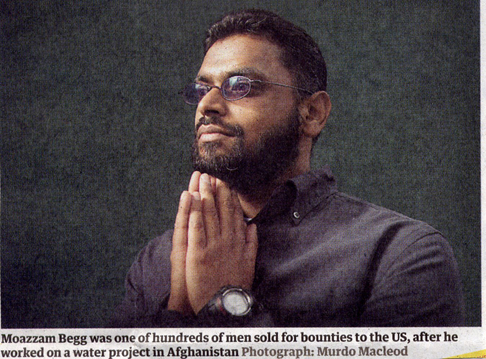 Moazzam Begg had been with his family in Afghanistan, working on a charitable project helping to provide schools and water wells. When in 2002 he and his family fled the war to Pakistan, he became one of hundreds sold for bounties to the Americans. Later he ended up in Guantánamo Bay, supposedly a major terrorist. Moazzam was tortured, then held in solitary confinement for 18 months, he suffered from post-traumatic stress disorder: had nightmares, flashbacks, all the symptoms. But the military said this was a privacy issue.

In the book he has ironically entitled Enemy Combatant, Moazzam Begg draws back the curtain on this ‘privacy’. He describes with a dispassionate clarity the details of his detention in Islamabad, Kandahar, Bagram and Guantánamo. He does not minimise the use of despicable methods of torture and its psychological and physical effects but what comes through very strongly is his intelligence and resilience, due in part, no doubt, to his sincere commitment to the spirit and practice of his Islamic faith. One of the chief aims of the book, he says, is to find some common ground between people on opposing sides and to introduce the voice of reason so frequently drowned out by hatred and intolerance.

When in solitary confinement he got the guards and even, on occasions, supposed interrogators, talking about themselves. In some cases their political naivety and paranoid fantasies shocked him, but some others, he discovered, felt alienated and disillusioned by the role they were obliged to play. “I had always tried to like people, to see their positive side and I wasn’t going to change here”. We are introduced to a range of MPs (in this context ‘Military Personnel’) from different classes and backgrounds with some of whom he had serious discussions on literary, historical, religious and political subjects. Having grown up amid diverse cultures in Birmingham, his interest was fuelled and he was determined to learn. There was even one young black guy from the Virgin Islands who came to rely on him for personal advice.

Representatives from the Foreign Office and MI5, on the other hand, who came to interrogate or ’look in on him’ were a disappointment, they were ‘guests’, powerless to intervene on his behalf-the Americans were in charge. Gradually, although he was cut off from hearing about it, mounting public indignation led by concerned people on both sides of the Atlantic, forced a change of policy. Reading the final chapters of the book one breathes a sigh of relief when Moazzam’s is returned to British soil. He is reunited with his family and sees, for the first time, the third child who was born during his imprisonment.

To start writing this book in which he reviews his whole life so soon after his return from the three years of ‘detention’, is an effort to be saluted. “I have learned much and developed since my incarceration,” he says. He is now a spokesperson for a human rights organisation and works closely with Amnesty International as a recent interview attests.