My Son with Asperger’s Syndrome, by Brigid Marlin, Infinity Publishing 2012 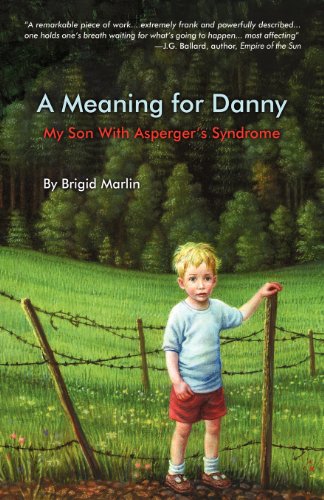 This is a personal account of the author’s experience in a strange world of warmth and a search for understanding, first as a child herself, then as a loving parent of a mentally and physically afflicted child whom she was unable to protect from his own torments. It recounts her struggles to support him physically and emotionally alongside his two younger brothers while at the same time developing herself and becoming an accomplished artist.

Not only did Danny have the syndrome called Asperger’s, which is considered a mental health problem and manifests as disruptive behaviour, difficulties in communication, not really listening or considering others, problems of learning while also having an obsessive memory for things of interest, feeling isolated, and poor physical co-ordination, but Danny was also prone to epileptic fits. His childhood and teenage years were spent during a time when medical research had not yet fully recognised and defined this syndrome and his treatment seems to have been experimental.

Brigid Marlin first takes us in simple clear language through her own story as a member of an artistic American family and the complications of early childhood until it was realised at the age of 8 that she was very shortsighted. They moved to Canada, then Holland and it was in Ireland that she met her husband and then gave birth to Daniel, the eldest of their 3 boys. In the 1950s they moved to England and Danny started school, which was a hard transition. He was taken to see a succession of doctors, psychiatrists, social workers and priests- being diagnosed first as schizophrenic, then epileptic. All sorts of pills and drugs were tried, and even a raw food diet.

The care of a young person with frequent bouts of unpredictable behaviour and/or fits was exhausting for Brigid:

Even under this strain at home she developed her gifts as an artist and began to study the painting technique known as “Mische”, expressing new hope.

Danny was accepted as a boarder at a boys public school, but it was not a success. Aged 14, he began self-harming, and there were episodes of overdosing on the pills and threats of actual violence. He set fires. He smoked. There were dramatic emergencies. He was then “certified”, and had a series of bewildering hospital stays for diagnoses by various specialists. This included a spell in residence for “treatment” at The Royal Bethlem hospital, Croydon, which seems to have been an asylum in all but name. Depression was a strong factor, perhaps exacerbated by taking medication to reduce the severity of the epilepsy, which would have been in conflict with any anti-depressant medication.

Brigid was also helped at this time through the friendship and guidance she found with a teacher who advised those in his circle who were seeking for a sense of inner meaning and to become aware, be present and accept the conditions of the life we have and face its challenges.

At age 18, Danny was moved to Delrow house, a Steiner establishment, where there were mostly Down’s syndrome teenagers. He became a boarder but was still in low spirits. He started to say “… if I get better …” He was then sent to the Chalfont Centre for Epilepsy- but again he was depressed- Brigid reports a remark he made to her as he went back to Chalfont on one occasion:

“I have been trying to cure myself so that I can live at home all the time…if I don’t have a fit for 3 months, can I live at home?

So that was why he had been trying so hard! I felt all the pathos of it, and yet the thought of having Danny home all the time was a nightmare. It would be difficult for any of us to carry on a normal life. I knew what would follow: Danny would retreat more and more into his room and become withdrawn again. I tried to explain this, to show him that he needed to live in a community, but all he could see was the bare fact that his mother did not want him to live at home….

I saw him get in the taxi, his head still bent. I felt like a murderer.”

After another wrist-slashing he promised that if he did it again, it wouldn’t be at home. He also said: “I look on death as a friend. Sooner or later I am going to kill myself.” He finally succeeded (not at home) with an overdose, aged 21.

This story does not give answers or teach strategies or remedies, but very honestly describes what happened and the succession of impressions of this particular developing life and its impact on those around him. It is a brave undertaking by his mother, the author, to bring her thoughts, memories and feelings into balance and to honour his life. For the reader it offers a gathering of real and moving impressions of a mother who cared about developing herself as an artist at the same time as caring deeply about her afflicted son.