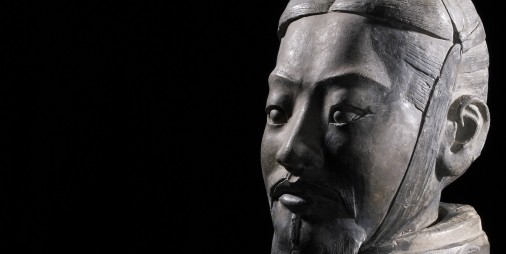 This exhibition raises troubling questions about the supreme power of one human being. There are examples throughout history of power hungry and ruthless despots, and First August Divine Emperor of the Quin, born 259 AD, was hungry not only for power, land and riches but also to have everlasting life and to continue ruling his empire for ever. Soon after he became King of Quin at the age of 13, his tomb construction was begun and for more than 30 years a palace and tomb complex guarded by about 7000 terracotta soldiers was created around a central burial mound. This burial mound is unexcavated and much of the site is still to be explored. What has been found is a vast and varied reproduction of many aspects of life at that time: Life-size people (mainly soldiers of many different ranks, but also acrobats, musicians etc) and horses in terracotta; carriages, birds, money, weights and bells in cast bronze; armour and ornaments used in burial made of jade. The work is skilled and the exhibition shows the techniques employed to create and fire the large clay pieces.

The effect of the exhibition as a whole is curiously un-moving and even the terracotta warriors, detailed and particular as they are, seem to look on detached and preoccupied. The archaeological site is certainly an amazing and fascinating phenomenon on a vast scale, but in comparison with the 2002 Royal Academy exhibition of Chinese 6th century Buddhist finds, ‘The Qiugzhou Discoveries’, the effect created by the sculpture is an outward show of mass strength and lacks the extraordinary inner, subtle qualities of the sculpture in the latter exhibition. The Qingzhou statues demonstrated very refined and skillful stone carving which resonated with an inner energy. These could only have been made in a sophisticated and stable culture with a refined spiritual belief system and a mature understanding of man’s place in the order of things. The Emperor Quin’s army has skillfully executed detail, each warrior is individually characterised with headdress, hair and costume showing rank and status. The different qualities of hair and cloth, leather straps and tassels all beautifully indicated in the clay. But the whole effect is for outward show rather than for inner reflection.

This exhibition reveals a culture of megalomania preoccupied with the need to insure against the Emperor’s loss of power in the next life, without a sense of there being any real hierarchy of authority or a belief in any greater God or Creator of the world. This raises interesting speculations concerning our present day beliefs about death and what happens after we die. That one man could harness such vast industries and create a whole work force for his future life over 30 years creates questions about the varied and different cultural attitudes of today and about the value given to human life and the after life now. Many civilisations apart from this one have been based on the premise of an active life after death – notably the Egyptians 2000 years before. What did they know? Do we understand any better now?