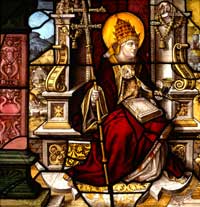 At the National Gallery until 17th February 2008. Admission free.

This sixteenth century glass from churches and monasteries is shown together with drawings (eg Dürer) from the same period. The Virgin is depicted as pretty, insipid, and sentimentally pious. The infant Jesus is no longer the Christ, but a jolly baby. The glass itself looks like painted glass- very skilful but quite different from mediaeval stained glass, glowing with its individual pieces of different colours.

In the art of the Renaissance, and indeed for some centuries afterwards, we can see a great development of skills in drawing, composition, and the use of colour and perspective. For what? It seems to have been in order to depict accurately how one ordinarily perceives “the external world”.

In the work of the early Renaissance painters such as Giotto, Cimabue and Martini, despite their increasing competitiveness (that is, egoism), the influence of mediaeval art, in which the painter strove to be at the service of God, was still strong, as in the living tradition of Icon painting. “Art was for God’s sake”. Quickly, however, the sense that religious images are meant to express a truth behind appearances, the presence in the Mother of a Saviour, the being of the Christ, was replaced by skilful images of ordinary people, in ordinary postures and habitual expressions. It was the period referred to as Humanism, when “Art was for Man’s sake”. One may admire the technical ability of the artist, his “genius” and “originality”, but in fact there is nothing coming from the origin- from the source of all there is.

2) Breaking the Rules – The Printed Face

At the British Library until 30th March 2008. Admission free.

Following the late nineteenth century decadence when “Art was for art’s sake”, came Cubism, Vorticism, Futurism, Dadaism, Expressionism, Anyotherism- a process of dissolution paralleling the First World War and the revolutions that followed. This exhibition of books, pamphlets, newspaper articles and photographs reminds us of the time when the apparent stability of the pre-war period broke to reveal confusion, despair, the lack of any centre of gravity or steadfast view of man and the world grounded in the spirit.

Not long ago the Archbishop of Cologne said that art which was not related to religion was “entartete Kunst”. There was a great outcry, and he had to apologise. In 1937 the Nazis mounted an exhibition under that very title- it means “degenerate art”- which showed the art, mainly from the 1920s, of which they disapproved. The view which has prevailed so far is that the exhibition in fact showed great modern art. It is curious that the Nazis particularly disapproved of two painters, Dix and Grosz, perhaps the first to use “art” for the expression of their subjective cynicism and negativity. But the Nazis were not able to recognise those who, though inevitably affected by the general confusion, were searching for a truth behind appearance, such as Beckmann, and lumped all the “modernists” together. As for the art of which the Nazis approved, it was a mixture of lifeless imitation of neoclassicism and the same kind of “socialist realism” favoured by the communists.

Edwin Hedge has reminded me of the occasion when a reporter asked A.K. Coomeraswamy, curator of the Museum of Fine Art in Boston: “What is the point of a museum in this day and age?” The reply was: “To show that there is no such thing as progress”.