This temporary exhibition which was at the National Museum in Dublin was a striking and unique presentation of six plaster cast replicas of high crosses drawn from four different regions of Ireland. There was no need to be put off from visiting the exhibition because the crosses were cast replicas. I have visited the original monastic crosses several times over the past thirty years and the exhibition in no way detracted from their presence, maybe this was because of the setting, and because the casts commissioned by Colonel G. T. Plunkett towards the end of the 19th Century were so well done.

The crosses portray some of the finest examples of such early Christian stone sculpture in Ireland and range in date from the 9th to the 12th century. Included are two crosses from Ahenny, County Tipperary, two from Monasterboice, Co Louth (the magnificent West Cross and Muiredach’s cross), and single crosses from Drumcliffe, Co Sligo and Dysart O’Dea, Co Clare.

The display was set in a semi circle with the 6.5 metre high West Cross from Monasterboice as the centrepiece. With the background kept in darkness and the only illumination the spotlights reflecting off the crosses themselves one had the possibility of receiving a strong impression of these masterworks.

The traditional High Cross is a standing cross with a circle, made of stone and often richly ornamented. High Crosses exist from the 7th century in Ireland, and were later erected in Scotland and in Wales; the Irish High Cross is noted for its distinctive shape (the ringed Celtic Cross), the amount of ornamentation, and for the quality of its decoration. The earlier crosses had only geometric motifs, but from the 9th and 10th century, biblical scenes were carved on the crosses.

The High Cross casts were kept in storage for three decades but in recent years a selection was displayed at Nagoya, Japan, where two million visitors saw them. They were then recently, for a short period, on display in Dublin. I was deeply touched by that exhibition. 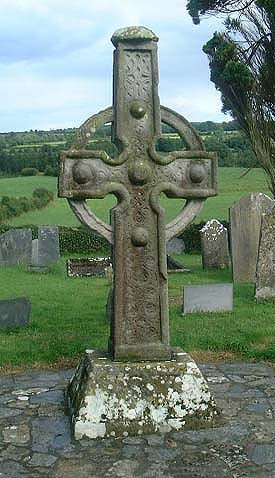