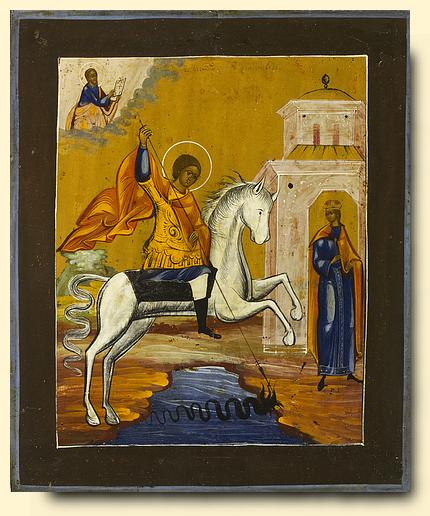 Deepening an appreciation of an ancient art

From my late teens until my early twenties I sometimes spent hours at a time making pencil drawings from photographs. The subjects were miscellaneous, but were usually well known buildings. Looking back, the effort of trying to capture the proportions and lines was a reward in itself, although there was always an inner dissatisfaction with the end result. Regretfully, I did not persist.

For many years, traditional painted icons associated with the Orthodox Church have made a deep impression on me. I remember vividly an exhibition at the Victoria and Albert Museum over fifteen years ago of some of the greatest icons from museum collections around the world. The richness of colours and quality of the painting was simply staggering. But most overwhelming was a sense that something of a completely different order was being conveyed which could not be understood by the head alone.

Years passed. Then three months ago, I happened to pass the Temple Gallery in Kensington (http://www.templegallery.com). The sight of so many luminous icons rekindled a wish to spend more time trying to understand. On the web site for the gallery, one particular icon caught my attention. We have all heard of St.George and the Dragon, and the image is quite familiar, but what is the story really about?

And yet, on closer inspection, there are more and more surprises. St.George’s face shows no anger, no tension, but is attentively looking at the dragon directly along the line of the thin spear. Two figures look on in the background from either side of the river, a holy man and a princess. Then, there was a shock of realising that there is no violence in the image. Perhaps there could be another way of understanding this? What do the elements of the image represent? There were no answers, but the response was a wish to draw again.

After completing the first drawing, I searched for images of other icons, and found an early icon of Mary and Jesus. In trying to copy the image, I attempted to maintain the proportions of the figures and the background frieze carvings. In spite of all the intricacies of detail throughout the icon, it became clear that it was Mary’s eyes which were the most important element. On starting the drawing I was full of determination to capture the essence of that serene image. Once the two figures were completed, there was surprise that in spite of trying very hard to copy the image, my own interpretation was now evident. There was also an “inner revolt” at having to complete the background frieze. How long was this going to take? Completion has only deepened my original question – and my wonderment at the skill and knowledge of those ancient painters.

I am indebted to Ross Fuller for some helpful suggestions on drawing and for his recommendation of a film about Archimandrite Zinon, long regarded as outstanding among icon painters in contemporary Russia. It does not have sub-titles, but even in Russian the film conveys Fr Zinon’s spirituality, dedication and artistic gifts. 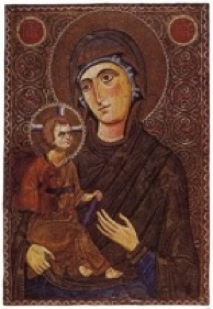 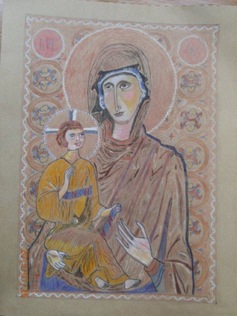