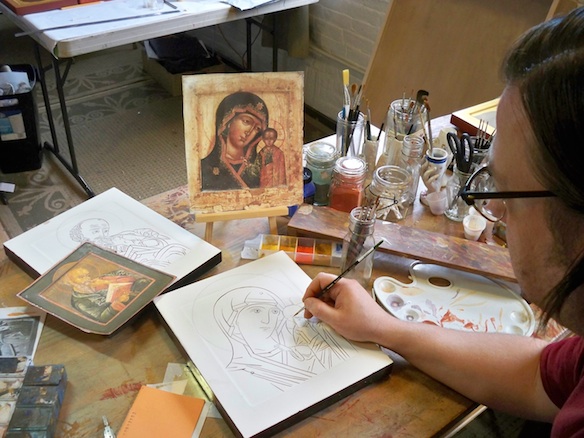 Marek Czarnecki during work in his studio Seraphic Restoration in Meriden, CT.

Lidia Gruse: What is an iconographer? Is that person an artist, a craftsman, a monk or someone else?

Marek Czarnecki: As an iconographer, I wear a lot of hats. I need to be an artist, a careful craftsperson, a theologian, a chemist, a carpenter, a gilder. I must be observant and grounded in my Christian faith. The way I integrate the discipline of iconography into my life is more important than taking formal vows.

But like a monk, iconography is a vocation, not just an occupation. It takes a lot of time, it is very isolating, it’s a struggle, practice and discipline, it’s not something one does for the rewards of money or ambition or recognition, but out of our piety and ideals. I tell my students that this kind of work is good for people who are in prison, with a lot of time, in a spirit of repentance, and without worrying about clothes or food or money.

You have to be prepared to change yourself to do the work, for everyone it’s different. Sometimes this is a spiritual challenge, sometimes there is some obstacle in your personality or character that needs to be transformed, sometimes the challenge is the physical clumsiness of your body or eyes.  You can’t use iconography for what you want; iconography will use you for what God needs. But you have to get out of your own way.

L.G.:How long does it take to write an icon and what is the most difficult part of the process?

M.Cz.: The time it takes to write an icon depends on your experience and the complexity of the composition.  The longer you have worked, and the more skillful you become, the technical part of the work goes quicker.

I am so glad that when I decided to become an iconographer I could not see the struggles that were ahead of me.  The hardest part of the work is acquiring the vision of the icon; after that – all problems are technical.

What is frustrating is that like all spiritual work, iconography is an art without a ceiling. As soon as I think I have reached some kind of level of success some new challenge pulls the rug out from underneath me. I’m never happy, or ready for that.

M.Cz.: It’s a different world, and completely different spiritual climate. The Novgorod iconographers were like fish that didn’t even know they were swimming in water. They made icons very naturally from who, what and where they were. Their work has a sincerity and innocence that came from just being, and they really felt they were making images of an objective reality.

We lack the culture that produced and supported those humble masterpieces – we are like fish looking for water, and then when we find it, we are swimming against the current of the world. The Novgorod iconographers were making icons of saints, we are making icons of icons. Our icons are self-conscious and nostalgic.

The world’s best living iconographer today, Father Zenon from Pskov, asks if it’s possible to write an icon today, even though he himself has written thousands of them. He is working from scorched earth – the tradition was destroyed in Russia, and he is part of its reconstruction. He says that until we live in a world of deeper spiritual experience, all our icons will be nostalgic – we will have to rebuild the foundation first.

Here in the USA, we don’t even have a foundation to start with. The highest praise we give our cultural heroes is that they are “iconoclasts”.  The result is an iconography that is eclectic, and filled with all the ideals and confusion of modern American life. Worse, we do not have good historical examples, except what we find in books and reproductions. There is no standard of authenticity to judge ourselves against. Once you start writing icons, you start to notice how promiscuously the word “icon” is used, it can mean a celebrity, or a brand of soda.

M.Cz.: I always knew I had a vocation to be an artist, but my calling to be an iconographer came later. I graduated with a degree in Fine Arts/Painting from the School of Visual Arts in New York City. I was living in New York, I thought I was going to make paintings about the anxiety and horror of modern life, like Francis Bacon, because I thought that was most real, and I was 19 years old.  Thank God we don’t become who we want to be!

Around 1995, my father was at a parish council meeting, and the new pastor wanted to buy an icon of Our Lady of Częstochowa for our church. My father raised his hand and said, “Don’t bother to buy it, my son is an artist, he will make it for you”. That was my first icon, made more than 25 years ago. I had no idea what I was doing when I made that first icon, or where it would lead me, but I saw that nothing in my life had tied together the threads of my life as had that one icon. No one work of art I had ever made was as useful to the world as that clumsy copy. I also understood that in order to do this work, I would have to drop everything else. Like the gospel tells us, once we have found that “pearl of great price”, we sell everything in exchange for it.

Having an art education only helps with some basic skills, but basically I had to learn iconography from zero. It was very humiliating, in the best way possible. After six years of struggling on my own, I understood I couldn’t teach myself, and looked for a teacher. First I studied iconography with a school of lunatics, who over-mystified the icon, and worked their own way, completely outside the historical / traditional streams. This only made things worse. I was at less than zero when I finished working with them.

Then I met Ksenia Pokrovsky, who had just immigrated to Boston from Moscow. Anything good I know about iconography I learned from her. Her teaching was grounded, sensible, and deeply traditional. She told me it would take me at least 10 years of study; when I told her I had already worked eight years, she said, “No, from today.” When I mentioned I was an artist, she said, “Oh, then it will take you 15 years!” because I had so much to unlearn.

L.G.: Must an iconographer be rooted in the Orthodox Church’s tradition? Does this apply to you?

M.Cz.: Because of the ecumenism of the Second Vatican Council and the multi-cultural climate of America, I was already very open to Orthodoxy, but not willing to leave the Catholic Church. I think this is also something very American – that I can be two things at the same time, the same way I can be both Polish and American, even if there are contradictions.

There is a very real reason why icons developed and were nurtured in the climate of Orthodoxy. In order to write icons, all iconographers, regardless of their background, must understand, respect and love the Orthodox church; our first step as ecumenical Catholics is to build this bridge in our hearts, and to be good ambassadors. To be mindful of our church’s sins, and to ask for forgiveness; to see their sins against us and forgive them. Orthodoxy revealed something that did not appear in any other form of Christianity, and in all humility, we have to bow before that. If someone has any kind of argument with Orthodoxy – theological, political, ideological, etc., it’s better for them not to write icons. This bitterness will show in their icons. Ksenia noticed that Protestants who write icons usually join the Orthodox Church, but for Catholics, the practice deepens the experience of their own church.

One of the reasons I left my first iconography teacher was he kept saying to me, “You are such a good iconographer, when will you convert to Orthodoxy?” I found the question offensive, because in my own naïve eyes, I felt we had more in common than we were different, and that our differences were not very significant.  I left that teacher, because he insisted that all his students must be Orthodox.

When I met my second teacher, Ksenia Pokrovksy, the first question I asked her was, “I’m Catholic, can I study with you? Do I need to convert to Orthodoxy?” She looked confused and hurt, and answered “Marek, I’m Orthodox, can you study with me?” Then she added, “If we walk with our sins in front of us, we have only one church.”. When she said that, I was so moved, I thought, here is my teacher. Bishop Kallistos Ware, in his book “The Orthodox Way” writes that the wall between East and West does not reach to heaven. Ksenia also had a very enlightened spiritual Father, the martyr Father Alexander Men, who told her that she must teach people of all different denominations.

The Orthodox Church is very wary of teaching people iconography who are not Orthodox, and honestly, I don’t blame them. They have a great treasure to protect. People think that iconography is some tool for their own expression, and they paint icons of Jimi Hendrix, Malcolm X, and Jesus with antlers (I wish I was making this up).  I love that in Polish, the word for sacrilege (“świętokradztwo”) means “the theft of holy things”, because that’s exactly what this is. Ksenia called this, “the exploitation of the icon”. It’s hard to reconcile American individualism with the idea that our icons are a service to the church, not a vehicle for our own egos.

Marek’s latest icon, “The Suffering Christ”. In Orthodox tradition, “The Bridegroom”: “How can the guests of the bridegroom fast while he is with them? They cannot, so long as they have him with them. But the time will come when the bridegroom will be taken from them, and on that day they will fast.” Mark 2:19-20

Marek Czarnecki is an American iconographer and artist from a family of Polish refugees who came to the US in 1950. He teaches and writes icons out of his liturgical arts studio : Seraphic Restorations in Meriden, Connecticut. Czarnecki’s icons can be found in the homes and chapels of individuals, as well as churches across the United States, including the Franciscan University of Steubenville, and the Catholic Cathedral of the Immaculate Conception in Springfield, IL. His icon painting has been featured in numerous exhibitions, videos and articles, and in the New York Times.