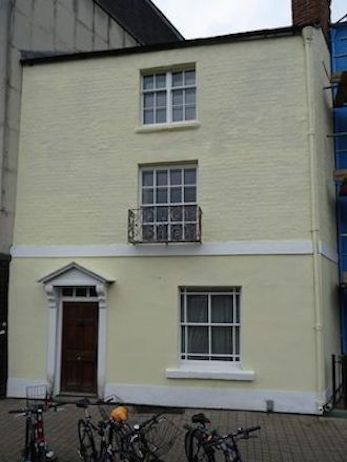 At the bottom of Headington Hill

One of my favourite stretches of road is the final stage of the journey from London to Oxford as Headington Hill swoops down into St.Clement’s. Passing under a picturesque, ivy-clad bridge, we emerge from a dark tunnel of foliage into an area of extensive parkland with some of the most majestic trees I know towering on either side.

At the bottom of the hill, on the right, there is a short terrace of Regency houses, each painted a different pastel colour; and at the Oxford end of this row, standing slightly proud of the rest, is an earlier house built, I would say, in the late eighteenth century.

There is very little to it. The overall shape of its frontal elevation is a tallish square. Within this, the most prominent feature is the front entrance. A simple fanlight surmounts the door and on each side of the former are elegant consoles (brackets) supporting a rudimentary pediment.

Also on the ground floor is a single window. Above this a simple string course runs across the whole frontage and continues round the side of the building. This demarcates the divide between the ground and first floors. It also symbolises the baseline of a classical temple façade upon which the giant columns would stand.

The first floor is represented by a single window graced with a decorated wrought iron balconet, probably a modern mock-Georgian replacement of the original, if indeed there was one. Above this, evidencing a third floor, is a smaller attic window. Again, ‘attic’ is a term referencing both an ancient Greek race and a position on the façade of a Greek temple.

And that’s all there is to see from the road, at least on the physical level. As in all buildings of the classical era, however, there are other levels of meaning present, even in this most humble dwelling. In what follows I shall attempt to sketch two of these levels which exist beyond the mere physical structure and the materials of which it comprises. The first of these consists of the stylistic forms and components with their implicit meanings. These, as I have already indicated, often have their origins in the ancient world many millennia ago. Beyond this, but less amenable to description, is the ultimate level of cosmological meaning. By this is intimated a Primal Source which mirrors itself by means of number and proportion in the subsequent levels of the universe, from the original genesis to the manifestation of such physical forms as the modest house under consideration.

Any similar sized building of more recent construction, say from the 1930s to the present, would lack these levels of meaning except for the merely physical. And even that physical plane would be truncated in comparison with earlier styles. I say this because, at the advent of the railway system it became possible to shift the mass-produced materials of the industrial revolution around the country, and this disturbed the natural harmony characteristic of the locally sourced materials common to all Georgian buildings (It must be noted, however, that by the mid eighteenth century enterprising traders were beginning to manufacture in bulk architectural ornaments cast in stucco and iron, catalogues of which were sent to local builders).

There is another difference: modern buildings of this scale usually have their dimensions determined according to the recommendations of the British Standards Board. These state the minimum heights of doors, rooms, etc. With these as their guide, builders, to save money, often adopt such minimum standards, so they have tended to become the norm.

By contrast, in the classical era such heights and dimensions as those of doorways and rooms were governed by a sense of a larger human stature than merely the physical. This was authorised by the many architectural pattern books available to the meanest local eighteenth century builder. Furthermore, said builder would have been familiar from childhood with the nobly proportioned country houses in construction around him, based on such exemplars as the villas of Palladio in the Venetian hinterland.

The artistic reflexes of the time had become refined over the generations by this quest to translate classical ideals into English clay and plaster. No doubt too there would have been an atmosphere of competition and emulation prompted by the builder’s awareness of being judged by informed peers and an interested public, and this would have considerably sharpened and enhanced his creative efforts.

Such appreciation of ideal beauty and elegance and the striving to embody it in physical form is missing in modern architecture. The nearest we have is perhaps the influence of the early twentieth century Bauhaus design school with its edicts of starkness, functionality and lack of ornament. This at times might result in an appealing simplicity, but in comparison with its classical forbears it is a depressingly barren and inhumane ideal.

Governing the forms of the European classical revival between the fifteenth and early nineteenth centuries were the ornaments and proportions of the classical temple. In the house under consideration this would be evident both in the disposition of the façade and in the wall arrangement of even the simplest rooms. In most rooms there would be a skirting board with carefully studied mouldings, as well as a dado rail and an architrave around the top of each wall, these too with appropriate mouldings. This whole ensemble would correspond exactly to the forms and proportions of the sacred temples of the ancient classical world.

It is this connection with the sacred that suggests the deepest and subtlest level present in classical buildings, an assumption of a higher level of existence which both governs and is revealed by all form. This is the level of a Divine Source and Intellect, seen as measuring out the universe according to simple laws of mathematics and proportion. Thus impelled, the cosmos burgeons out through successive levels, finally to finish its journey as the beautiful forms of the physical world. Through such an understanding even the smallest classical dwelling was able, by its interior and exterior appointments, to suggest a divinely constructed universe reflecting in each of its details the presence of an all-knowing Creative Principle.

A similar range of meanings is present in all other humane studies of the time: art, music, literature, philosophy and the rest. Such a message would have been recognised either subliminally or consciously by craftsmen, connoisseurs and the general public of the time. It would have been felt as a sense of underlying security, of living in a benign, well-ordered universe.

Sad to say, that understanding has largely now been lost, and through this forgetting we have been shut out from part of our natural inheritance of deep, joyful and enlarging human experience.

It was round about the year 1830 that this change in feeling and felt identity became prevalent. Thus it was that over a comparatively short period one paradigm expired and another took its place. This was true for architecture, literature, religion, music, the mental climate of society and everything else. How and why this happened is another story…

Architectural Principles in the Age of Humanism, by Rudolf Wittkower;

Architectural Theory from the Renaissance to the Present, publ. Taschen;

On the Art of Building in Ten Books, by Leon Battista Alberti, 1452;