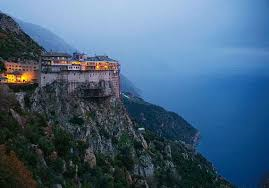 Free from the burden of the past, without preconceptions, receiving life afresh and new in the present moment. This is the divine invitation that is always being extended to us and yet, such as we are, and such as are the conditions of our daily lives, it is a huge challenge to accept. In fact, it is a demand to which we are rarely equal. So, the Holy Mountain acts as a call to turn again to the depths and simplicity within, which lie behind our complicated lives in the world.

Having been a previous member of the footpath team, a serendipitous meeting with Dimitri Conomos at the breakfast table of the 2015 Madingley Conference presented me with the opportunity to join his group for the 2015 camp. So it was that I, a solitary Anglican made my way from Canterbury to Ouranopoulis arriving on the evening of our departure. Making the short walk from the Zeus Hotel to the Pilgrim’s Office of the Holy Mountain to meet my companions the following morning, I am touched by that rare and liberating sense of anonymity which sometimes descends upon us. I am about to meet and spend a long period with a group of people I have never previously encountered. It is a rare opportunity to step outside the established roles of daily life. I know nothing of the daily life of my companions, nor they of mine, yet the simple fact of our presence together there testifies to an invisible bond.

Our party gradually assembled outside the Pilgrim’s Office on the morning of our departure but the Diamonitiria it seemed had not been authorised! Happily, the situation was rapidly resolved by Dimitri who made the necessary call to Vatopedi. There was time for a quick coffee in the Cafe by the quay while we settled the finances for the trip and made introductions. Then, we were on our way.

Each time I have visited Mount Athos, my heart has warmed to the Byzantine bustle of Dafni when the boat comes in. Already, the concerns of the world – money, entertainment, sex, comfort seem to have receded. The concern here is something else and it is felt and sensed as something more or less tangible. Our first night was spent in the Monastery of Xeropotamou where, as a non-orthodox attending the evening service, I was summarily banished to my room by a rather zealous young monk. Whilst I do not really understand this exclusive perspective, I was not offended at all and quite accepting of it. This surely says something about the change in inner state that being on the Holy Mountain can effect.

Travelling the following day, we arrived before the imposing walls of Vatopedi, a monastery in which I have spent some time on each of my previous visits. Pilgrims are very welcome here and indeed it seems that a conscious choice has been made by the Abbot to embrace them in substantial numbers. It was good to engage in conversation with a friendly young Australian monk and to be put to some work in the kitchens, peeling vegetables. So the pattern of our days unfolded – the long early morning service, breakfast in the unique atmosphere of the Vatopedi refectory (never has a little wine at 8am tasted quite so good), on some days a little work in the kitchens, engaging conversations with my companions from the UK, Poland, Romania and Russia…, the occasional much needed afternoon nap and early evening walks down by the Vatopedi quayside.

Something of a highlight on this trip was a walk undertaken with two companions to visit the monasteries of Esphigmenou, Hilandar and Zografou, spending the night at Hilandar. At Esphigmenou, a young monk, despite only a smattering of English, attempted to explain something of the Monastery and its history. The forbidding ‘rebel’ status and stark declaration of “Orthodoxy or Death” emblazoned on the monastery’s walls had made me somewhat hesitant beforehand and so I was touched by his efforts to communicate and his patent sincerity. At Zografou, the kindness of Father Clement and his pleasure in receiving us also remains imprinted in my memory. Despite the commendable openness of Vatopedi to large numbers of pilgrims, I could not help but reflect on the saying of popular wisdom that “Every stick has two ends”. The kind of intimacy experienced in that brief visit seems less possible amid the comparative busyness of Vatopedi. The material poverty of the monasteries of Zografou and Esphigmenou as compared to Vatopedi was also very evident. Yet, the ecstatic quality in the chanting of the monks towards the end of the morning service was experienced at Vatopedi.

Some business to be attended to back in the UK meant hurriedly rearranging my flight and leaving 2 days earlier than anticipated. I thus happened to travel back on the boat from Dafni to Ouranopolis with Dimitri and another of our party, where our quiet conversation touched on matters of family, orthodoxy, music, Australia and doubtless other topics since forgotten. My last night was spent in Ouranopoulis at the Zeus Hotel. An evening meal of prawns and a cold beer by the waterside, enhanced by the sunset and the service of a friendly and pretty young waitress, was indeed a pleasure.

A friend of mine once joked that the modern world was “a struggle for dominance between the forces of Islam and Coca Cola”. I do not think he intended his amusing epithet to be taken too literally but it captured something essential in the dilemma of modern life. So, it is hard to pin down or express quite what Mount Athos is for me as a pilgrim and visitor but it is surely that something that calls to the inner man. Certainly, it is remarkable that a place given entirely to the spiritual life still exists in 21st century Europe and the beauty and isolation of the land and sea are very striking but, forced to choose one word, I would have to say that Mount Athos possesses a certain ‘magic’ (not exactly an accepted theological word, I know) which draws you to it. Whatever one calls it, I am sure that it will call me to come back again. 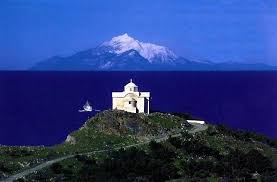 Note – this piece was originally published in the Friends of Mount Athos Annual Report for 2015. Here is the link to the website:- http://www.athosfriends.org/