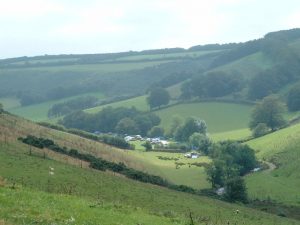 A promise had been made to my niece and nephew at their father’s funeral in May to take them and our two younger children on a camping trip in the summer. The date was set for the third weekend in August. As the planned Friday drew nearer, the weather forecast for the south of England became more ominous – a harbinger of “typical” English summers of torrential rain and gale force winds. Nonetheless, there was a determination that the trip must go ahead, since there would be no other opportunity before the start of school.

After a busy working week there was little preparation time, resulting in a fifteen minute hiatus to identify tents, sleeping bags, stoves and other camping paraphernalia and throw them in the car to drive down the A303 to Taunton and on to Exmoor. By the time the four children and our Springer spaniel were on board the car was uncomfortably full but no-one cared – we were escaping!

Daylight was fading as we left Taunton and headed towards the heart of the national park. Rolling hills and in the distance, Dunkery Beacon (the highest point of Exmoor) were silhouetted against an increasingly heavy, grey sky. We played “I spy with my little eye” en route, during which my admiration for the 12 and 13 year olds’ inventiveness for words increased considerably. Our destination was Westermill Farm camp site, located some three miles upstream from Exford. When we arrived, we had to drive very slowly behind two geese, who strolled slowly along the road for over one hundred yards into the farmyard, oblivious to our impatience.

We started to pitch the tents in the dark, as the wind began to increase. The first tent for the four children went up reasonably quickly but then, as the rain started to pour down, the flysheet would not fit over the inner dome structure. What was wrong? There were three flexible poles – two of the same size for the main dome and a smaller one for the porch. We had mistakenly used the smaller pole for the dome. We quickly swapped the poles, set the flysheet with the guy ropes and the tent was ready. My daughter and niece were quickly settled inside, and their relief at getting shelter was palpable.

All that was left to do was to put up my little two man tent which would be shared with our dog. By now the rain was teeming down which slowed progress considerably. It was a very simple tent – two poles, one layer only and one peg in each corner, and it was a relief to get inside. The night was long, cold and wet, with water coming in from the entrance, the vents and the sides, and the wind gusting so strongly that the tent was leaning at 45 degrees. Our dog was determined to try and share the air mattress as well! In the distance, the occasional bellowing “moo!” of the cattle could be heard, a bass accompaniment to the storm.

Having slept only fitfully, I awoke the next morning to find everything in the tent was damp. The little stove we had brought refused to light but we munched our way happily through some cereal and bread rolls. How I missed a hot cup of tea or coffee! After exploring the camp site in the continued driving rain (there are various walks from the site and deep pools in the river upstream), we drove to Lynton and finally found a café that would accept walkers and dogs, with the children wolfing down the all-day cooked breakfast and cakes. It seemed as though all the tourists in North Devon had converged on the little coastal town in search of shelter, apart from a large group of surfers who were making the most of the rough seas.

Later in the day we visited the prehistoric bridge at Tarr Steps, a stone-built clapper bridge reputedly over three thousand years old and one of my favourite places. This time, the river Barle was a raging torrent where it was previously a benign, shallow river. With the stove still too damp to light, we retreated to an Exford pub for supper and then returned to the tents where we sang some songs and talked for a little while before succumbing to a more natural tiredness from the fresh air. It was striking to witness how different each of the children are – with their own evolving interests and perspectives.

The next morning, we struck the soaking tents just as the sun came out for the first time in over 36 hours. Everyone was tired, but even this short trip brought a sense of life and exhilaration. Fortunately, the children seemed to enjoy the little adventure and want to come back again to explore the hidden valleys, hills and rivers of this lovely place. I returned to work the next day smiling inside …