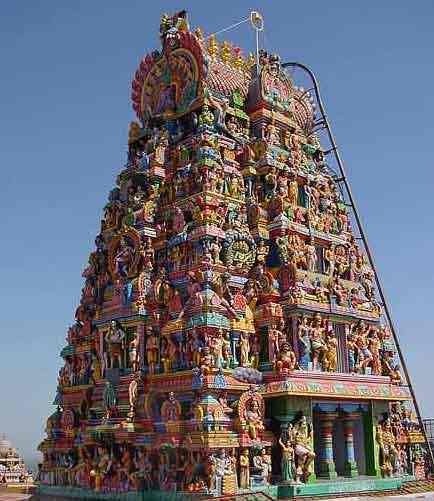 For over two thousand years, the Malaikovil temple in Palani has been praised in the songs of the wandering Sannyasin. As we approached this town in southern Tamil Nadu, we saw some pilgrims, mostly in saffron robes or saris, walking towards it. The country around is quite flat. but within Palani there is a perfectly dome-shaped mount; the shape suggests a small volcano, but it is of granite. From it one sees a lake to the south, and the high crags of the Palani hills behind it. Many pilgrims come each day, make the two-kilometre circuit of the base, and then ascend the 704 large steps to the Temple. We went up in one of a series of small carriages pulled up the 45 degree slope by an electric winch. We went into the Temple, walked around, looked at the views, joined others walking about, men, women, families with children, eating, drinking, talking, or just sitting, and then managed, with pauses, the steps down. Dusk was beginning, and pilgrims were lighting the steps with small camphor lights

In the evening, after dark, the air balmy, a mass of tiny shops, carts and stalls selling fruit, vegetables, rice, dal, trinkets, jewellery, toys, clothes, cloth, and fast food- chappati, roti, dhosas… And the streets in the centre thronged with people and bicycles, with only the occasional auto rickshaw or car edging its way through, amid the sound of recorded Hindu music. It was extraordinarily pleasant- somehow quiet, despite the hubbub.

Two days later there was to be an important festival at the temple. When we left to drive to Madurai, on an ordinary two-lane road, there was a trickle of pilgrims walking towards us, to Palani. I thought this trickle would soon die out, but the numbers increased. It quickly became almost impossible to overtake, when a car came the other way one had to slow right down, and when a bus came, actually drive off the road, as the pilgrims were soon occupying the whole of one lane. As mile followed mile, there was this endless stream of barefooted pilgrims, walking steadily, occasionally sitting to rest or eat, carrying few possessions. At first I thought there must be hundreds, then thousands, then I realised I did not know how many- it must have been some tens of thousands. How could the mount hold them all? Where would they sleep? And what about toilets?

In the midst of busy traffic, one had such thoughts, and then moments of silence, receiving that impression of an endless, quiet stream of dedication. After forty-five miles, when we turned off to join a motorway, still the whole of one lane of the road was full of pilgrims. How long would it take them to reach Palani? We had such thoughts, but it was somehow clear that they did not. They were just walking.

It occurred to me later, as images of the pilgrims kept returning, to ask: In this time of our ever faster rush into the Kali Yuga, what is the influence of these pilgrims? And what about Mecca- though the overwhelming majority of those who go there, now go by plane. But in India, it is not a pilgrimage unless you walk all the way barefoot, and Palani is merely one of many, many sites of pilgrimage- Is India saving the earth?

On that road, visibly, two streams.