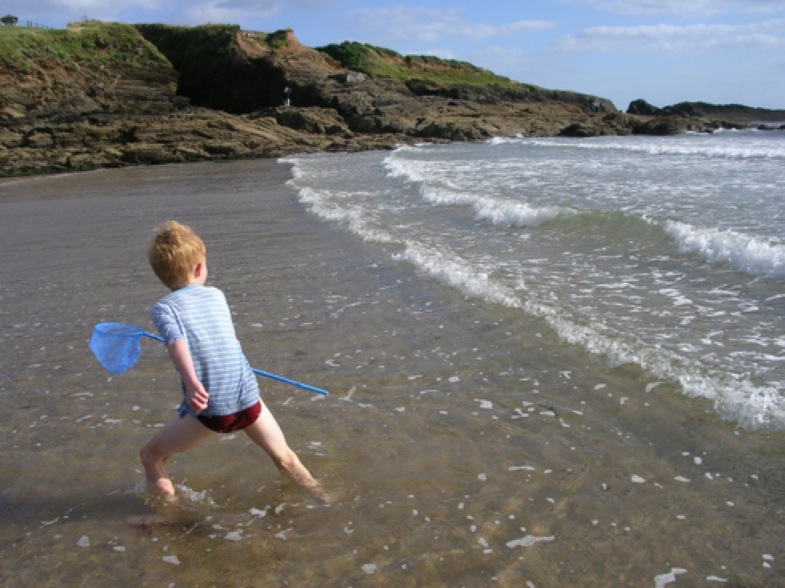 Young children seem so free, untrammeled by the conventions and constraints that bedevil us adults. Why do we interfere with it? We can’t help it I think. When I think back to my childhood I remember moments like this one, moments when I had a sense of complete freedom. I also remember moments of silent confrontation, when the expectations of the adults around me clashed with my own inarticulate sense of rightness. I remember my own painful failure to produce the required behaviour, particularly when it came to saying thank you.

I remember feeling vaguely baffled by my own lack of alertness; how was it that I didn’t remember to say what I ought to say? Thank you letters were another thing that baffled me. I found writing very difficult and could not understand why I should have to labour for presents I (usually) didn’t like. Surely, I reasoned, the recipients, having been children themselves once, would know that I didn’t really mean what I wrote, surely they could not really want such false thanks? Eventually, when I was in my teens, I rebelled completely over a peculiarly awful present from an aunt. My mother said I couldn’t have the present if I didn’t write the letter. ‘Fine, send it back to her!’ was my lordly reply. I feel rather sorry for my mother now when I think of this.

I visited Armenia in 1991 with a group of friends, having never before been out of Europe. The trip was full of the unexpected, full of vivid impressions and difficult experiences. The bareness of the place astonished me; the lack of shops, of advertisements, of the comforts of life that I took for granted. Yet wherever we went we were warmly welcomed; people who had little themselves, still gave their best to us. Partly this was because we were visitors, Europeans who perhaps represented a beautiful future in which Armenia would become a tourist destination. At the same time, their welcome seemed so genuine and natural. I did not know how to respond to such kindness; saying ‘thank you’ (in English) felt inadequate. The words tasted synthetic in my mouth.

I learnt that the Armenians have two words for thank you. A long word, something like, snor-na-galatune, which meant roughly: ‘you have made me feel gratitude’. This word is kept for special use; occasions when you truly wished to express your feeling. They have another word for everyday use; the French ‘merci.’ This they used all the time in the way we use ‘thank you.’ However, I noticed that they pronounced it in a particular way, with a sort of furtive hurry, ‘messy’, as if they knew they didn’t really mean it and were slightly embarrassed.

All these experiences influenced my own approach to ‘thank you,’ when I came to have children. From the beginning, I decided never to ask or tell them to say thank you. When I felt a thank you was really needed, for instance after a party, I would say it myself. My husband couldn’t understand this approach and we have had many arguments about it, but I held firm, because it felt important. As the boys grew, my feeling about this strengthened. Witnessing other mothers berating their tots, ‘Say ta!’ or ‘What do you say?’, produced in me an almost physical feeling of ‘no!’ I felt that to force a child to ‘say thank you!’ was to do a kind of violence to him, though I couldn’t explain why. So I persisted in following my plan.

Beginning to grow and do things themselves, sometimes William or Daniel would do something which made me grateful. Then, I would try sincerely to express my feeling by saying ‘thank you.’ There is such a different taste between a real sincere thank you, and a saccharine one; I feel that children, whose senses are so open and sensitive, must perceive this even if unconsciously.

Now, my sons are teenagers and a strange result has come from my efforts. Sometimes, when I do something particularly helpful for one of them, he thanks me. In that moment, I sense that he truly feels gratitude. And then, in myself I experience a strange feeling; the difficulty of receiving. And a feeling of gratitude too, towards him.

I understand now that to truly say thank you, is to express a real feeling. When we force a child to say thank you when he does not feel any gratitude, we teach him to deceive. More than that, we separate the word from the feeling, leaving him with no way to express that sincere feeling which all human beings will sometimes experience and wish to express.