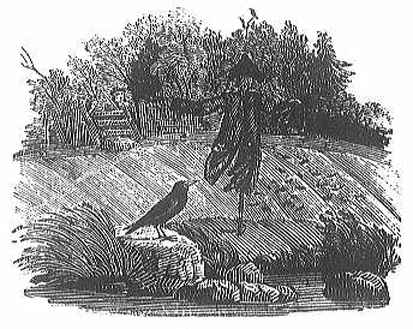 I lift void eyes and scan
the sky for crows, those ravening foes,
of my strange master, Man.

In my youth there were many scarecrows on the land, whether in small vegetable patches or in larger fields of grain. They came in all manner of shapes and sizes. A few were presented as if going to a ball, others as though they belonged to the order of Dharma bums. Some wore hats and scarves as if they were grandee farmers; others obviously were cobblers and farm labourers – working class scarecrows. But they all had a job to do and that was to scare the crows.

The scarecrow can harness a deeper meaning, and after many years of taking their presence for granted I commenced to explore them. I noticed that not all scarecrows could keep the crows at bay; some actually seemed to attract them. Upon some, after an appropriate interval, the clan scouts of the roost would sit on top of their straw-filled heads or upon their arms and call out in the kaw-caw of crow language, and shortly thereafter the barley field would be visited by flocks of their kin.

In many traditions it is intimated that man has two natures. Plato’s version of the origin of this peculiar human dilemma is found in the Symposium, where he tells us that Zeus, with thunder as his chief attribute, cut primordial man in two, causing our dual nature. There exists the psychology of the Two Lands of ancient Egypt denoting the duality of spirit and matter: “on earth, the subjective and objective spheres of activity; in man, his higher and lower selves”. Similarly, the doctrine of Old Lithuanian Songs, a view is offered of a double scission: “First and ‘vertically’, there is the separation of sun and moon, that is, spirit and soul; then, as a result of man’s loss of connection with his higher possibilities, there is a ‘horizontal’ scission within the soul itself. Man is inwardly divided, since he now lacks contact with the transcendent principle that alone can resolve opposites into complements.”

In the psychological language of some lines of Alchemy there is reference to the joining together of the two halves of the moon, which enables living understanding to take place. To reconnect with his higher nature, the initiate must first reconcile the horizontal scission that is sometimes expressed as “putting his lower house in order”. After this process has been properly fulfilled, it is indicated that there is the possibility of the royal marriage between the Sun and the Moon.

Alchemically the crow is symbolic of the nigredo first stage of matter in the Great Inner Work of preparation for transformation, in which the lower nature, that can be so easily corrupted through indulgence of the appetites, is restrained and without any form of denial or suppression guided towards its proper place. Once the integrity is restored to this nature, it can begin to operate in cooperation with the spiritual.

How an effective scarecrow accomplishes his work is a mystery. Standing silent against the force of a destructive aspect of a nature that is often manifested through the habitual, they are in elemental communication with the folklore of the unknown, and this evokes a watchful presence. The wise crow senses this as a rightful danger and leaves the cornfield alone; the knowledgeable farmer respects the bird as a function of the demiurge and leaves part of the harvest for the crow.

In today’s world, the community of farming has disintegrated, food has become a fearful commercial product, folk traditions are often viewed as quaint and provincial, but to those that moved among them and felt something of their original context, they imbued the landscape with an immediacy of understanding, wordlessly but surely preserving the wisdom of the ancestors, preparing the way as a matter of course for the journey from childhood innocence to the innocence borne out of simplicity that emerges from living presently through direct experience. 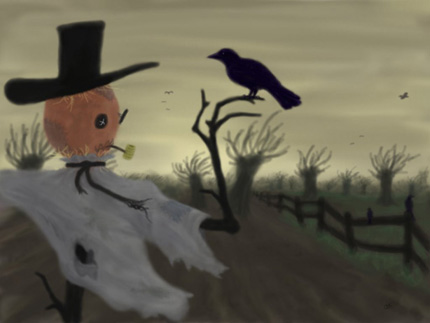