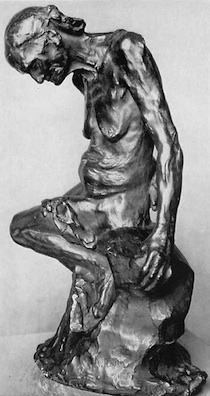 Rodin. She who was once the beautiful Helmet-Makers wife.

It was prophesized before he was born that the Buddha, if he witnessed old age, sickness or death, would renounce his kingdom. So it was arranged that he lived a life sheltered from anything unpleasant and never saw such disturbing things. Nevertheless, mysteriously, when he reached responsible age, he did encounter, first, old age, then sickness, and finally, death. As had been foretold, he then renounced everything in order to search for the causes, asking what could be the meaning of life which ended in such a way.

This story made a deep impression on me when I was young precisely because these same phenomena of human existence had not disturbed me at all- not until some years later when I shared my father’s last days and saw him die. But the veils of sleep then drawn apart to reveal fierce contradictions in myself, and the incomprehensibility of human life, were quickly redrawn. Only now, when old myself, can I ask, naively, humble in front of my not knowing anything: “Why do we get old?” “Why do our bodies suffer sickness and other infirmities?” “Why do we die?”

That everything dies and that life is continuously reborn- the longest-lived animals, trees, even mountains and continents and, supposedly, suns and other stars- is, or is said to be, a fact. But what is a fact? If I have not experienced something, is it a fact?

My father’s body, his hands already rather cold, stopped breathing. But at that moment it was obvious that life continued, although the body had come to its end. Yes, but why do muscles get weaker, why cannot I stand on one leg? Why? Not in the sense of biochemical and physiological changes which can be measured and, in a manner of speaking, “explained”- but simply, naively- Why? Why does it have to be so? Why does even a great being have to suffer physically through the dissolution of the body?

That life may continue.