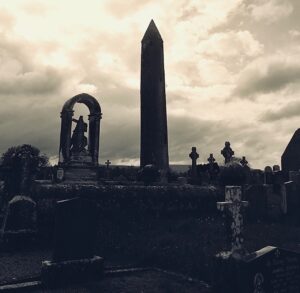 The body alabaster’d, vestmented
outlined in white satin —
the manicured head
lay in a coffin lined with grey lead,
that strange way is how over there
the Americans bury their dead
so the elder people said,
as I was drawn back
from the blood-parched-fading
far away his now-distant hands
the last glassing touch of the unknown friend
as lamenting old women
keened for his life, and for the life of their dead.

The uninhabited vessel discarded, the timeless
left in potential guarded,
the ghost life measured in the disturbance of others
as his vertical mother stood rock-rooted and back
in her feeling alone and untouchable
a living menhir in the wake-house for the dead
with its fierce laughter acceptance and sorrow.

Over the mountain, traditional life-darkened aged men
carried the weight high up, and down on boned shoulders
their cold steps unslackened by sentiment —
as my memory quilted his dying on a highway in Missouri
where I saw him last turning
sun-shadowed, face smiling, pulsating with me
as we rotated ripened fresh hay
thrown out into a long summer’s day near Templederry.