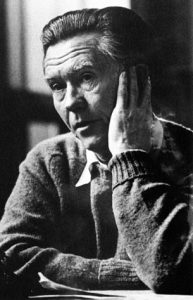 The Poetry of William Stafford

The poetry of the American poet William Stafford was certainly unfamiliar to me and, I think, to the majority of readers in England, at the moment when, ten years ago, I was given a copy of his poems. This was lovingly selected and edited from his lifelong work and included the extraordinary, illuminating poems from the final eight months of his life. He died in August 1993 aged 79.

In distinction to the American big poetic bow-wows who were more or less his contemporaries in the later 20th century (say Robert Lowell, Wallace Stevens, Elizabeth Bishop and others), Stafford reads as a quieter and more grounded person. a poet and teacher, a gentle figure loved by his students and responsive to their needs. Not a man, perhaps, of great noisy causes but well recognised within the American literary world and outside it.

What he wrote appealed to me at once. I have read and thought about his poetry over ten years. Yes, in contrast with the international names, he had a quiet, sure way with words. The poems have a time and place … the hinterland, Kansas, Oregon, the high streets of small towns, farmland, forests and small rivers. His people are father, mother and brother, neighbours, school children nearby. They are themselves and not over indulged; hinted at by a man who both loves and likes them. In the background there are few big events requiring posturing or declarations. Stafford’s world is not metropolitan but that of men and women living in the wide spaces of the mid-West with nothing whimsical or folksy about them.

The gathering in of all these subtle realities brings me to the final moments of his writing. This is laid out skilfully by his editors who select from the poems written in the last eight months, some 70 ending with ‘Are you Mr William Stafford?’, the ultimate, on the morning of his death. Indeed it is Death who asks ‘Are you Mr William Stafford?’ To which William replies (as you or I might do) ‘Yes, but….’ and Death allows him a little longer to get used to the idea.

These final pages are called ‘The Way It Is’. There is no sentimentality, no exhaustion. The last poems go on in his brief, reflective way. Nothing flaccid; they do not weep. It sounds as if a wise old plainsman has traveled and come home and speaks a little without pretension, simply to who will listen … such as you and I.

Two others from this group stand out for me, so close are they to what seems to be my way too. I quote them below. His poems are his truest autobiography. He is the kind of poet you might quietly sit beside of an evening without talking too much.

The Way it Is

You Reading This, Be Ready