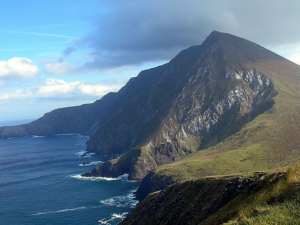 High above on Croaghaun, I once walked there

with winds that were grey and sighed with despair

that called me down


into streams of verse-laden expressions,

a Joycean flow of consciousness, a Beckett-styled suspension

of an elder language with its weaves of migrating alphabets

which flew with wild geese around the rim of the earth

over barefooted passages, a language devoid of a word for “yes”


and on Achill Island words that crawled

were plucked out of cold sockets

during a time of great famine —


remain in the blood clots of blighted descendants

who, disembodied — dispossessed — speechless at first,

grew fearful of the intervals of stillness


and were poured into coffin ships

of royal Gaelic words that once were chanted

amid the sorrows of the human condition

in rhythms of life with a religious measure.


The Great Famine (Irish: an Gorta Mór) also known as the Great Hunger, was a period of mass starvation and disease in Ireland. It began in 1845 due to a blighted potato crop the stable food of the poor and dispossessed. Although its severity had passed by 1849 it effectively continued until 1852. During the period it is estimated over a million died and a million emigrated. The famine was more severe in the West and South-West of the Island where the Irish language was still dominant. Famished thousands who tried to escape particularly to North America died in route in over crowded poorly managed ships. These became known as coffin ships.

The English language is not the ‘native tongue’ of the Irish, it is not embodied thus they can, and many do, play with it. This can be heard in the words of Joyce, Beckett, Synge, Flann O’Brien. It can be heard in any city, town, village, or in a meeting along a quiet country road. It is said the Irish speak a lot, write a lot, English words come ‘undigested’ tumbling out. Maybe there is a feeling that something fundamental is missing and as a result there is a suspicion of this imposed, partially absorbed language. Yet if you train the ear to listen you will hear in conversation the sound and posture of an old language that is not straight lined but mythologically layered and goes round and round often to the exasperation of those not attuned to what is taking place.

To read Finnegans Wake you need to put yourself in front of it and let it work upon you. At the heart of Waiting for Godot you hear the ‘dark earthly language of the stones’ echoing through the wild Atlantic skies of Connemara. Up to a point all is given, but beyond this point there no coming of God or Godot, a man must then face the hopelessness of his situation rise up and ‘make a life of one’s own.’

“There is no word for ‘yes’ in the Irish; instead one repeats the verb of the question: ‘Is it Bartley that is there?’ ‘It is.’”