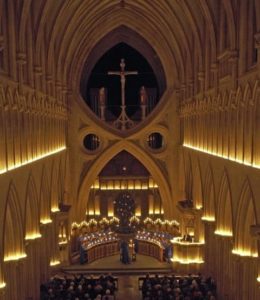 Was the thirty mile drive across the Somerset levels to Wells worth the effort for this celebratory event?  The concert included a mixture of old and new carols with an eclectic range of readings, including extracts from Charles Dickens, Samuel Pepys’s diary and Rilke’s “Letters to a Young Poet”.

The cathedral was lit entirely by thousands of flickering candles, which by contrast with the shadows of the ancient arches created a particular impression of warm welcome and expectancy which met and accepted my weariness. When the cathedral choir began to sing, the cohesive wholeness of sound encompassing different harmonies was a real shock, a call to return to myself. This effect was noticeably absent when the choir was accompanied by the organ. The choir sang beautifully, remaining perfectly in tune throughout a number of demanding unaccompanied arrangements.

The effect of their individual and collective voices was most moving when they sang from different parts of the cathedral, creating a patchwork of uplifting sound that was simultaneously near and far away. It was a reminder of the occasions when I participated in these types of concerts, and how rewarding it is to sing with a group of musicians that can really listen to each other. As the concert progressed, the music and words gradually created a natural, shared attunement of the audience towards more openness. My weariness melted away, replaced by an inner alertness which was not distracted by the fidgeting teenagers in front of us.

After the concert finished, a lone fiddler was playing carols at the medieval city gate. A quiet hope arose in me.