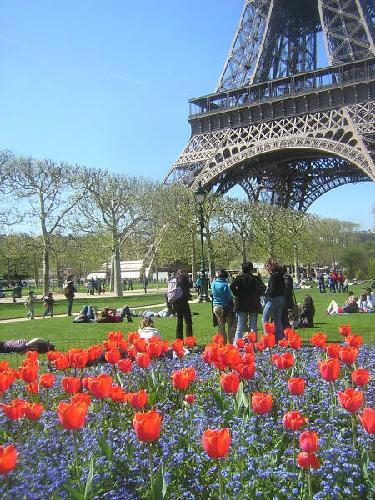 After an unusually mild winter, spring has begun: early blossom has already been scattered by the wind; the forsythia is out, and leaves have begun to appear. The park not far from where I live has a more colourful aspect at last. But the real subject everyone is talking about here in Paris – apart from the spectacular loss of popularity of the president only nine months after he won a convincing mandate, and the dramatic hike in inflation – is the impending local elections.

These municipal elections are held every seven years throughout France, but Paris is a special case for a number of reasons. Each arrondissement elects its councillors and its mayor, but there is an overall mayor of Paris as well, who has considerable power and status and controls a huge budget. Since 2001, Paris has been held by the socialists led by Bertrand Delanoë. Apart from losing the bid to hold the 2112 Olympics (no bad thing, apparently!) he has made a big impact on Paris, especially in transport. Car driving has been made progressively more difficult, while public transport has been further encouraged. (Most visitors to Paris appreciate the integrated transport system, which is both efficient and cheap). Although very unpopular at first, bus lanes have made bus travel much quicker. Traffic has been reduced by 20% on main roads in the city, with a corresponding reduction in pollution – a problem which was threatening to get out of control (few who lived through the summer of 2003 here will forget how pollution added to the misery of the sub-Saharan temperatures). The metro now runs until 2 pm on Friday and Saturday nights, and stations are being renovated and improved. A new tramway has been introduced, which when completed will go right round the edge of the city. 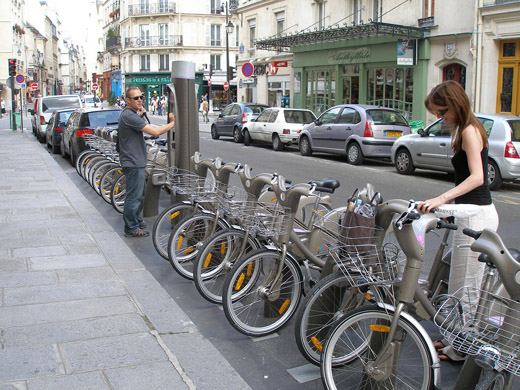 But above all Delanoë has introduced “Vélib” – a network of bicycle stations which has proved to be both tremendously popular and very visible. (Although no doubt some motorists find the anarchic behaviour of some cyclists very irritating). Working with a big advertising company, which has provided all the investment, a virtually free system of bicycles has been established in a matter of months. For a small deposit, people can make use of bicycles throughout the city, and the service is free for up to 30 minutes. There are already plenty of “stations”, and the plan is to have one every 300 metres, so it is easy to “hop” from one station to another at no cost. They are already a feature of Paris life: for enjoyment of course, but also as another means of getting around, without having to worry about parking. They are also very useful after the metro has closed (there is a big shortage of taxis here). 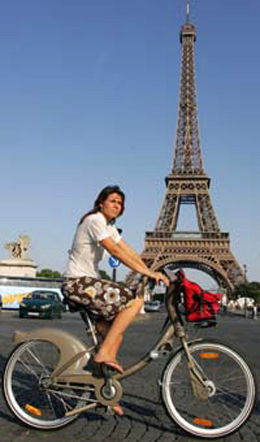 And Paris is an ideal city to cycle in, because it is so small and compact as well as being good to look at. For example, it only takes me about 30 minutes to cycle from where I live (on the eastern edge of Paris) to the centre. There are more and more cycle lanes (another Delanoë initiative) and during the transport strikes last autumn it was possible to get around without too much difficulty (a fact that was not especially popular with those on strike, but which helped to extend Delanoë’s appeal to more conservative Parisians). Some of his cultural policies are more debatable – for example the “Paris Plages” initiative, transforming the borders of certain roads into “beaches” during the summer strikes me as rather absurd, but it seems to be popular on the whole.

So, what are his chances of success this time? In general, local elections in France are decided on local issues, and the existing administration usually has the advantage. Until 2001, Paris had been governed by the right, administrations made notorious for widespread and systematic corruption, both financial and electoral. Jacques Chirac (mayor for many years before becoming President) is being prosecuted for several cases of corrupt practice, as is his successor and protégé. The right is divided, with rival lists in several arrondissements, whereas Delanoë has worked with the greens, and has made overtures to the centre right as well. He has the reputation of being very authoritarian, and does not conceal his presidential ambitions, but the consensus is that he will be re-elected. The fact that the President is losing popularity at an unprecedented rate (and is not even mentioned in much campaign literature) may also be a factor. Elections, as always in France, are in two rounds on the 9th and 16th March respectively, with plenty of horse-trading in between. By next month then, all will be over. Spring will have further advanced and I will be able to write about more normal features of Paris life as I experience them.