In our technologically advanced society, it is commonplace to denigrate the past and to believe implicitly in “progress”. “What have we to learn from ancient savages?” seems to be the dominant assumption behind our attitude to the past.

The site of Babylon – until recently a US military base. 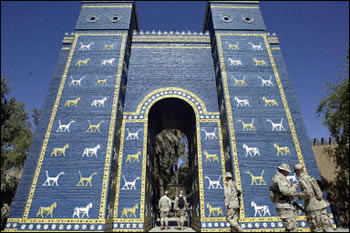 Of course those (such as me) who have undergone training in literature cannot so easily entertain such naïve notions about what has come down to us. Together with the undeniable progress resulting from the technological application of scientific discoveries there have been other, no less portentous, losses on the level of essential human relations and values.

If one takes the notion of “culture” to include a whole way of life providing vital perspectives to individuals as they confront the eternal, unanswerable, questions which life poses, there can be no “progress”. Yet these questions are themselves essential to any fully human life: “Who am I? Why am I here? What, ultimately, is my life for?” What I am suggesting then, is a scale of values by which it is possible to discriminate between earlier cultures and our own.

To give a concrete example, not so remote from us – Shakespeare’s England. On one level it was undoubtedly a brutal and violent world: political and religious oppression was rife; cruelty, torture and harsh punishment commonplace. It was a world in which the “rights” of women, children and the needy were not even considered worthy of debate. Inequalities on every level were assumed, and public health and hygiene were rudimentary at best. Our thoughts about such a world cannot be coloured by nostalgia or sentimentality. However, in the context of the questions I set out earlier, can one be entirely confident that Shakespeare’s England emerges as less developed than our own?

The question is at least worth posing. The culture that made Shakespeare’s theatre possible addressed those questions, and not just for an educated elite. I do not want to evade the manifest deficiencies of Shakespeare’s England in terms of “enlightenment”, but I would like to suggest that by ignoring those deep, unanswerable question about the meaning and significance of life, our own culture seems, to say the least, less than fully human, and lacking in depth: “outwardly cock-a-hoop, inwardly despairing” to use D.H. Lawrence’s formulation.

The need for significance is a fundamental one which, if unadressed, can only lead to human misery. (I recommend in this context The Need for Roots by Simone Weil). I say “unadressed” advisedly, because answers are not even to be envisaged. (The value of a question does not necessarily reside in its answer). What I want to suggest here is that a civilisation is “great” insofar as it is able to provide forms in which individuals can search for meaning and significance in their lives.

So, to speak of Babylon,as an example, given the fragmentary nature of the surviving records – and above all my own ignorance – it is of course wise to be circumspect. There is a good deal of evidence of practices which offend current enlightened values: no one (I hope) would argue for the immolation of wives, servants and others when the master of the house dies. However, when one sees evidence of a highly developed cosmology and mythology; a sophisticated literature that clearly emerged from a vital oral tradition; sculpture and architecture that gave monumental and public expression to these cosmological epics and the rhythms of life on various scales; I think that the expression “great civilisation” – however provocative to contemporary assumptions – can be justified.

Artists’ impresions of ancient Babylon and the Hanging Gardens

In Paris at the Louvre in 2008 there was a major exhibition entitled Babylon, which then went to Berlin and London. Julian Arloff wrote:

What emerges with great force is the richness and sophistication of a truly great civilisation: a civilisation of law and the (written) word. The code of Hammarubi (1792-1750 BC) engraved on schist reveals a complex set of laws and punishments concerning everyday life. Particularly moving for me were the tablets of baked clay (there was no local stone) on which the epic of Gilgamesh was recorded in minute, impeccable cuneiform script. These date from the first half of the second millennium BC, but they were probably copies of an earlier version, itself derived from an oral tradition. Its version of the Flood predates that of the Old Testament (there is a good version of the epic in English by Stephen Mitchell).

It was a civilisation that developed artificial irrigation, thus enabling a more extensive cultivation of the land in very difficult climactic conditions. The excavation and maintenance of these canals required a more complex political organization, and a concentration of population into larger city units, rather than scattered villages.

We see evidence of a sophisticated religion, based on the sun, with the sun god Shamash, together with other deities, which have been reincorporated into other mythologies. Precise observation of the stars and planets resulted in the establishment of the zodiac, similar to that found today. A highly sophisticated mathematics (based on six, but with a zero introduced in the second half of the 1st millennium BC) enabled complex calculations, including square and cube roots. They were able to predict solar and lunar eclipses, among other things. A more rigorous way of denominating time segments gave a new meaning and reliability to their historical records.

A truly great civilization, then, but it did not emerge out of nothing, and was part of a whole complex of civilizations over a long period in the area between the Tigris and the Euphrates which goes under the general term Mesopotamia. It is only possible to indicate here some aspects of what was involved, a civilization at once unknown and familiar, as we see themes weaving in and out of well-known Old Testament narratives such as the Fall, the Flood, the “Tower of Babel”…

A great deal has been irredeemably lost; only fragments remain; much has been distorted and rendered largely meaningless – this is particularly obvious in the last part of the exhibition. I was also left wondering what will survive of our own civilization in (say) two or three thousand years. The crowning irony is that a contemporary “war of civilization” has led (predictably) to further destruction of even those fragments which have come down to us. 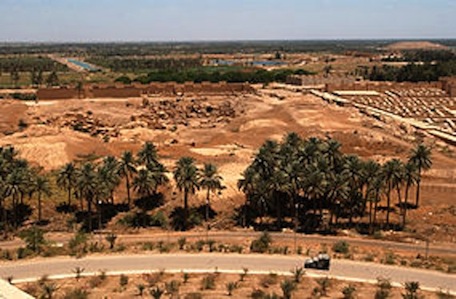