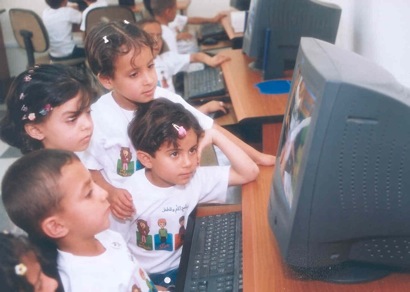 This article raises some questions for me. The use of computers is spreading to include more and more aspects of everyday life, including the use of internet shopping which theoretically allows us to purchase any item without direct human contact. The sale of gaming software for home use is, according to some sources, outstripping the demand for music and films. Is this significant?

As a father, I’ve noticed at first hand how the behaviour of our children changes when they have used even a non-violent computer game. It is difficult to get them to stop playing, and they lose all sense of time. On one occasion our eldest son (aged 10) returned from a sleep-over with one of his friends completely washed out and irritable having played on computer games for several hours. We have not purchased gaming consoles such as Nintendo DS or Playstation because of our concern over the effect of exposing our young children whilst they are developing to a prolonged “fight or flight” physiological response, and to the addictive effect of the electromagnetic display.

I have sometimes asked myself whether or not we are being “stick-in-the-muds”. After all, most 7 – 8 year olds have at least one games console, and we don’t wish our children to be social pariahs. There is also the clear evidence that computers can be a large help in educating children, especially when combining concepts with the chance to practice problem solving. Should we make a distinction between “educational” games and “shoot ‘em up” games? Is participating in a computer game any different from allowing a child to watch television? On balance, we think it is, primarily because a game places the player as a participant in the centre of an imagined world, having to make decisions quickly. A film or television programme does not demand instant responses in the same way, although it still exerts a powerful influence, and we have tried to limit our childrens’ exposure to this as well.

We recognise that when they are adults, our children will need to know how to use software as a necessary pre-requisite for many professional walks of life. Having spent sixteen years implementing various computer systems, I recognise that computer software offers many practical benefits for home users, business and healthcare delivery. On balance though, before they become teenagers, and face so many external influences which we will not be able (or wish) to control, we feel that our children need to experience many different kinds of activities. At least they may then be able to make more of their own choice about the influences they are subjected to. Some of our most memorable moments with the children have taken place when we worked together on “ordinary” activities such as cooking, woodwork or playing music, when they have a chance to engage more of their senses/faculties and learn something new. I’m convinced that the same possibility remains for adults, although it is less accessible.

I sometimes remember when I visited my father’s office in the early 1970s when the summation of “state of the art” technology was a telex machine. Business was conducted with very little if any computing power. The average home computer now contains far more processing power than was used by the Apollo space programme to place man on the moon. And most of that capacity is used to run ever more complex gaming software. It’s strange to wonder how we would struggle to live without computers now when we barely recognised their existence 40 years ago.

What do others think?