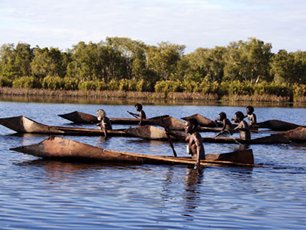 This is a fine sensitive film set in the natural beauty of the Arnhem wilderness of north eastern Australia; it is also the first full length feature made in an indigenous Australian language, featuring the Yolngu people of Raminging who speak Yolngu Matha.

Although several feature films have been made touching to one degree or another Aboriginal culture and their more recent history, such as Walkabout, The Last Wave, The Chant of Jimmie Blacksmith, Rabbit Proof Fence, none that I had seen (other than archival or documentary) have allowed the possibility to feel something more vital of the natural life and ‘dreamtime’ mythology of these ancient people. Rolf de Heer’s film is an exception and I heartedly recommend it.

Set in the ‘beginning, long ago time’ in the remote Arafura swamp region, the film opens with the voice of David Gulpilil stating,

‘Bout time to tell you a story, eh? Then I’ll tell you one of ours …

‘The rain’s been good and ten of the men go to the swamp, to hunt the eggs of gumang, the magpie goose. One of the men, the young fella, has a wrong love, so the old man tell him a story… a story of the ancient ones, them wild and crazy ancestors who come after the spirit time, and the flood that covered the whole earth…’

As the film contains stories set within stories (as the elder relates ‘like a tree with its branches’) Gulpilil the unseen storyteller speaking in English provides a vital link of communication between the indigenous cast, their traditions, and the audience.

Overall the film moves with an unhurried pace and the sense of ‘alternating time’ is well conveyed by the filming of Ian Jones and recalls the touching cinematic photography of Donald Thomson (1901– 1970) who spend several years working in Arnhem land in the 1930’s and was deeply committed to the Yolngu and their way of life. The film was in part inspired by Thomson’s work.