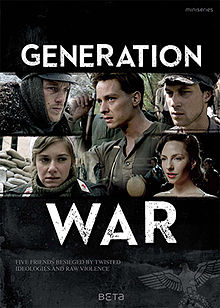 This 3 part series follows the fortunes of five German friends during the course of the Second World War. There are two women, one (Charlotte) who becomes a nurse, and one (Greta) who is a well known singer in Berlin. The men comprise two brothers (Friedhelm and Wilhelm), one an army officer, the other called up at the outbreak of the war against Soviet Russia. The third man, Viktor, is Jewish. I was utterly drawn into the narrative and the deeply affecting plight of the main characters, who are all extraordinarily well acted, against a backdrop of the progress of the wider war, advancing into Russia and then forced back all the way to Berlin. It would be unfair to give any more details of the story. Sometimes harrowing to watch because of the brutalities perpetrated by all sides (Germans, Russians and the Polish resistance)> I have never seen the horror of war so vividly conveyed. It is deeply moving, especially when the extraordinary courage and dignity of those facing death is recorded without unnecessary drama. Highly recommended.