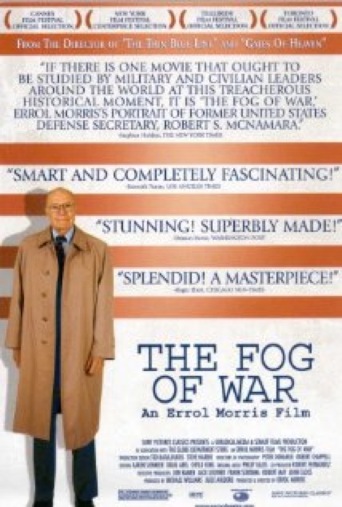 Eleven lessons from the life of Robert S. McNamara.

I was drawn to view this film, as for several decades I have asked myself the question, why is there war? What causes this form of madness – for in a way that it is what it is, with its violence, brutality, killing and destruction, and the more absurd to hear those who claim to have “won the war”!

The film was culled from more than twenty hours of interviews with former United States Secretary of Defence Robert McNamara. He offers his perspective on the fire bombing of Japan, the Cuban Missile crisis, and the Vietnam War. The documentary is interlaced with archival film footage and White House recordings from both the Kennedy and Johnson administrations.

The film is a striking though disturbing study of political corruption and denial. In McNamara’s subjective view of duty there are strong echoes from the Nuremburg trials – I was just following orders.

In many ways the film evokes Kubrick’s black comedy Dr Strangelove (1964), where those in position of authority are susceptible to monstrous self-delusion and self-righteousness, and inhabit a fantasy world that allows little space for views other than their own. McNamara’s description of General Curtis LeMay is disturbingly close to Brig. General Jack D. Ripper (Sterling Hayden), who contrives to instigate a nuclear war. During the Cuban Missile Crisis, LeMay urged President Kennedy to go for all out war with Cuba, whatever the terrible consequences, and declared some years later, “We’re going to bomb them [the North Vietnamese] back into the stone age.”

Regarding the indiscriminate bombing by the American Air Force in the latter years of WW II, McNamara states, “… we were behaving as war criminals. What makes it moral if you win and immoral if you lose?” He reveals that LeMay admitted that, had the allies been defeated, he would have been tried as a war criminal. This leads to a monologue on the morality of how war is waged; however, the more fundamental issues are never broached: the morality of war as a whole, and why war is waged at all.

One is reminded of Sun Tzu’s Art of War in the first of McNamara’s lessons: empathize with your enemy. He goes on to say that it was this that diffused the Cuban Missile Crisis. However, the lesson he claims to have learnt from this was not applied in his dealings with Vietnam, and as the terror of that conflict spread, he contrived his resignation. Challenged on why he later did not speak out against the war, he takes refuge in stating, “I am not going to say any more than I have,” that he will be damned if he does and damned if he doesn’t.

As sobering as his recollection of nuclear near-misses are his statements: “War is so complex, it’s impossible to comprehend all the variables”; “Rationality will not save us”; “In order to do good sometimes you have to be willing to do evil.”

I was struck while watching this film how so much of what we call “history” repeats itself. Johnson’s statements on Vietnam are more or less the same as Bush’s on Iraq. The words Good and Evil, God and Satan, are used no less today to justify war than they have been through the centuries. It maybe that McNamara ‘”learnt nothing, forgot everything”, and this seems to be the case when he offers the advice, “Never answer the question you are asked. Instead always answer the question you wish you were asked.” However, towards the end of the interview, the 86 year-old quotes with some emotion from T. S. Eliot’s The Four Quartets and declares, “that in a sense is where I begin to be:

We shall not cease from exploration
And the end of all our exploring
Will be to arrive where we started
And know the place for the first time”.

Maybe, but just maybe, he has.