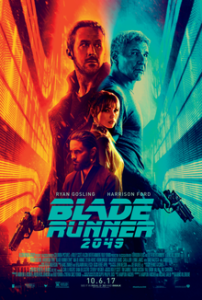 Blade Runner 2049 (released 2017)
What does it mean to be human? This is the question which continued to resonate in me long after watching this long-delayed sequel to the original film released in 1982. The story begins thirty years after the last film. Earth’s ecosystem has collapsed and what remains of the human population (those who cannot afford to live in space or on other planets) live in vast, dark cities, relying on protein farms and 3D technology which allows them to have holographic “partners” and live their inner lives almost entirely in an imaginary world. Society, such as it is, relies on genetically engineered replicants (programmed to obey authority and impossible to tell apart from humans without using complex cognitive tests) to fulfill many important functions, including law enforcement.

One such police officer is “K”, played by Ryan Gosling. As a “Blade Runner” he has to track down and destroy the remaining older generation of replicants which rebelled against their human creators in the original story. After tracking down one of these older models, K makes a discovery which threatens to destroy the balance between humans and replicants forever. To give anything more away about the plot would spoil the enjoyment of the film for any would-be viewer. What results is a twisting journey not only to find Deckard, the character played by Harrison Ford from the original film, but more importantly a profound inner journey for K as he encounters conflicting influences and begins to realise that he cannot trust his own memories or the motives of anyone around him.

Yes, the film is very long (over two hours and forty minutes) and slow-paced. But this helps to accentuate the transformation wrought in Officer K and makes the story far more measured and moving. The cinematography envelops the viewer in a detailed vision of a bleak future world which is all too convincing yet also melancholically beautiful. The acting is uniformly excellent and I left the cinema with a deep sense of empathy for the main characters.

How do we face the unknown? In this film, set in the present, twelve enormous alien spaceships suddenly appear in different locations around the earth. Governments bring teams of scientists together to try to understand what is happening. One of these teams is assembled in the United States, including an expert linguist. Eventually, access is given into the spaceship where the humans meet the aliens – strange “heptapod” creatures who cannot breathe the earth’s atmosphere and in place of speech place strange diagrams on to the dividing screen. What do they mean? Can the scientists’ conviction that the aliens are peaceful overcome the increasing doubts of the military about the aliens’ intentions and avoid a catastrophic conflict? As the main character (the linguist) spends more time trying to analyse the alien drawings, she starts to have strange visions……

This is another slow-burning film, with an interesting view of how attempts from an infinitely more intelligent alien race to communicate with humanity could be misinterpreted. Once again the acting is moving and convincing. 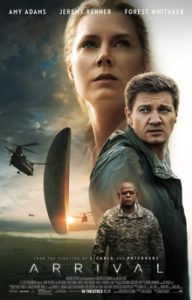