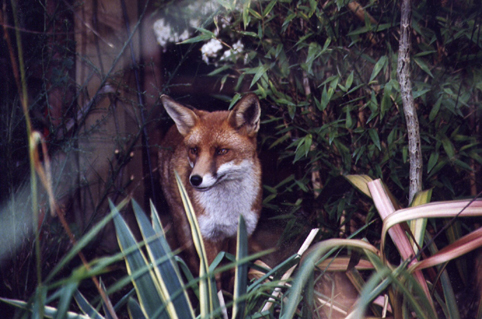 What do I remember about that summer, the ending of a marriage, the returning raw to Alcoholic Anonymous meetings, passing through the sweltering city heat receiving one day, one hour, one moment as it came, trying to remain sober. Working it through, acknowledging the pull and the lure of the highs and lows but going with neither. (To those attractions I heard myself say by the river-been there, done that). I kept on walking, not denying the pain, simply letting it pass through the body, and then one morning in the midst of it all, the fox came.

I remember sitting in the garden with my eyes closed, in the precious light-time before the first stirrings of dawn. When my eyes opened they met his, sitting gazing up ever so quietly by my feet. We shared as it were the one whole breath and so wondrously touched was I by his vital wilderness that I was carried straight to the curving hymn that is bowed around the arch of stillness. In such pregnancy of waiting, listening, sensing, there was in me an attunement towards prayer.

But everything is in movement and at the appointed moment the animal rose and slipped away. I remained a long while close to the feeling that I had received the gift of attentive company.

The days passed and to both my surprise and wonder each day he would return to join me in my sitting and gradually he would stay longer. I would go about my work and he would sleep by the bamboo or in the honeysuckle. When I approached him without attention or awareness of my body he instantly became more alert and prepared for departure; when I was more sensitive he remained, and thus in the practice of approach, a trust formed and blossomed. In time he followed me through the French windows and slept by my bed.

Thus it was as the months of June, July, and August swung by; but everything passes and one day during the cooling of September he was not to be seen, neither the next, or for days after. Then came a morning in early October, it was just after 5 AM, his head peeped through the whispering floor length curtains, there was such a joyful reception in me for him, and all the more when I stepped onto the veranda to see a young vixen. They playfully stayed awhile, she remained back a little but he came right up and I stroked him, then he turned and together they travelled away.

The years have passed and sometimes I gaze upon his photograph and wonder not why he came and went, somehow it is more and less than that, … the silence … given silently by a living friend, and I was helped to be in my aloneness that memorable summer. 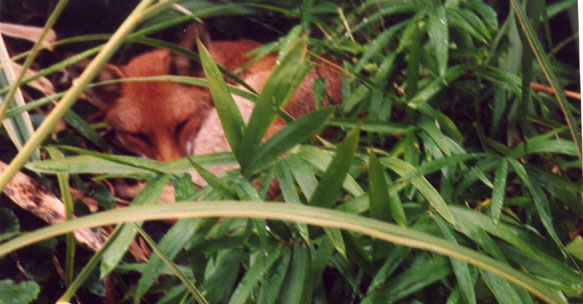