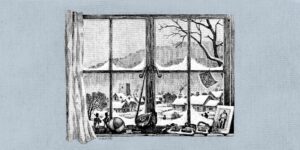 When I feel myself flowing back towards the meanings of Christmas in childhood in Wales, many different recollections arise. Although the memories are different, they came from a common source, a particular sensation.

I remember my Mother and Father taking me to chapel on Christmas Eve, even with the gentle large petals of snow falling, until they lay like a thick confetti covering the ground. The chapel was called ‘The Rock’ in the village of Pwll-Y-Glaw, and we walked about half a mile through the strange new landscape to reach it. Like most Welsh chapels, The Rock was built on two stories, with a lower nave and an upper gallery. On Christmas Eve (and at funerals) it was always packed with people, with many standing in the aisles. Sometimes, there were so many people that they trickled out into the snow, and the doors had to be left open to the cold.

The hymns were sung in Welsh, and I used to look up and close my eyes. After a while, all I could feel was a tidal wave of sound, which filled the entire building and shook the upper storey of the chapel, and which had grown to have a life of its own. It rose and reverberated like a tuning fork, until I no longer knew whether it was coming from inside or outside of me. When I stumbled out back into the night, that sensation was still ringing in my body like a bell. Every careful crack of a footprint in the ice, each bottomless step in the snow, and every ballooning breath in the air was, and is etched in my memory. A car stopped and a voice asked us to get in, but we were happy walking underneath the clear sky, and the canopy of stars.

On Christmas Day, the endless procession of Aunties and Uncles would begin. I did not know many of them but the same sensation would slowly seep back in, as the warmth from the flushed faces and the coals on the fire filled the house. Somewhere, there arose a subtle sense of support by a force I did not know, which was much greater than me, and which had my best interests at heart. I looked up at the great crag of slate that stood behind our house, and thought of the many little gray mice for which it was simply home.

One Christmas, my Mother and Father took me to London, to ‘Harrods’ in Knightsbridge. The building was huge, unlike anything I had ever experienced, and one vast room led to another. It seemed endless. At a certain moment, (I cannot recall how), I looked up and could not find my parents. Only the moment of my recovery remains. I was found surrounded by Harrods staff and other Christmas shoppers, sitting on the cashier’s desk in the Toys department and animatedly telling stories. Even as the lift doors opened and the worried frowns on the faces of my Mum and Dad appeared behind them, the feeling did not leave me, but stayed for hours afterwards. An abiding feeling that I might be lost, but that another sense of myself was supported in the act of release. It could float on the tide of the Unknown. It knew how to swim and move in that water. It did not need what was left of ‘me’.

When the sensation of life at Christmas returns, those are the images on my childhood wall. I can still feel the strange taste of that energy which evoked its own likeness in others quite spontaneously, which held me in its hand and would not let me fall. The energy of a presence where there was only watching and listening. Waiting for the next footfall, the next flushed, warm face, the next wreath of disappearing breath; the next crack in the ice on the road. That was all, and it was enough for a six, or seven year old child.