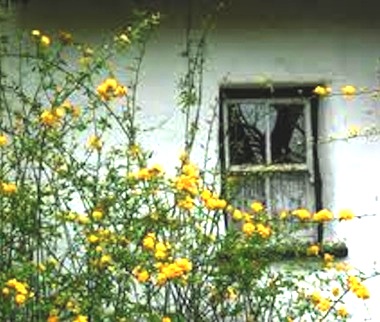 The late evening was warm; after a day’s work I cycled the four miles along hilly roads to Old Cappagh. There in the village hall with its fine, sprung floor ideal for dancing, I joined with others dancing polkas, reels, hornpipes, sets, and old-style waltzes. Hours were absorbed into the timelessness of energizing steps, and the body naturally, easily responded.

Later I pedaled contentedly homeward through countryside scented with fresh-mown hay amidst the enchanting echoes of a summer’s night. Around 3.30am I managed to awaken my younger brother who helped me to climb through an upstairs window into the bedroom I shared with him. For a long while after, charged with the energy received through dancing, I did not sleep but gazed contentedly sky-southwards towards fading stars and a light harvest moon.

Around 5.30am my father entered to call my brother and I to go milk the cows. I felt him standing quietly at the end of my bed, but feeling a strong resistance to rising, I pretended to be asleep. He remained for a time, then softly turned and walked away, my brother joining with him. Any notions that I had of contented further sleep were quickly dispelled; instead I tossed and turned and rapidly began to feel guilt for my passivity. The day warmed as the sun climbed, and though after breakfast I went to labour in the farmyard and meadows, I felt at odds with myself and was left with a feeling of loss in spite of the previous night’s elation.

As the years passed, something about that morning would arise from time to time in my mind and leave me wondering about what had occurred. After some decades I was again, one fine June day, standing by the cow house where I had worked in my youth. My father, by then, had grown old and frail. I was engaged in a conversation with my father’s younger brother, who told me, “Your father loved to dance. When he was young he would think nothing of cycling ten, fifteen miles after a day’s work to go to a good dance. I remember after one such occasion, he snuck back into the house in the early hours. He shared a room with me and Bill, and just as we helped him through the upstairs window we heard our father coming up the stairs to call us for milking. He did not have time to undress, so he just jumped into bed and pulled the blankets over himself. After our father left, he got up straightaway, changed his clothes, and then went and milked the cows and did a hard day’s work cutting the hay.”

As he spoke I began to experience a feeling not of guilt, which had troubled me through the years when I revisited the incident, but instead through my spine a movement more subtle and vertical which infused the body with a warm life. Under the influence of such life I did not feel separated by time from that morning years ago, a morning which had planted a seed, a truth that I did not then understand, which had kept calling to my attention. Through my uncle’s words, for a brief moment I felt the spirit of father and son as one and something other that was silent, potential, opening in all directions, prepared to undertake challenges that are necessary to inhabit the place of a responsible man.

What had been blocked then began to flow, fragments absorbed mysteriously, compassionately, into a relationship, timeless in its becoming son within father, father within son.