Nigh on sixty years ago while sitting by the corpse of my maternal grandmother, laid out as it was in the robes penitent of the traditional ‘Wake for the Dead’, I experienced a moment of foresight. Held within the potential of futures this moment could, depending on fate or the ‘fall of the dice’, manifest into being at Glenstal Abbey, a Benedictine monastery situated in a tree-filled landscape fifteen kilometers away from where I sat.

In moments throughout my life, the atmosphere of Glenstal beckoned. If my path had been one of devotion, I may have entered there and taken the vows of a religious order, but it was not to be. I took the path instead of an autumn leaf, was mudded and blown, oft times a long way away both geographically and psychologically from such a collective, challenging place.

Through the influences of an old folklore, I was fundamentally always more pagan than Catholic, more Shinto than Roman, more the dance of Sufi than Gregorian, but for all that the Abbey then had a rhythm, had a chant and a Latin mass which attracted me. Often as the dark of night was being tilted into the dawn of day, there was an enchantment of hooded monks moving quietly away from their incense-scented outer ritual, and on occasion as they did so a silent, universal sight behind my earthly eyes gravely gazed in and out upon the scene.

There, too, was a manifest story of a haunting, mythological historical drama set in war: the broken heart, the deformed killings, the half-birth if one at all of an Irish nation, and in its midst the death of the young Winifred Barrington. The IRA killed ‘Winnie’, the twenty-three-year-old daughter of Sir Charles and Lady Mary Rose Barrington, the then-owners of Glenstal Castle, in May 1921. For years thereafter it was rumored in the local community that her ghost was to be seen by the main entrance door. 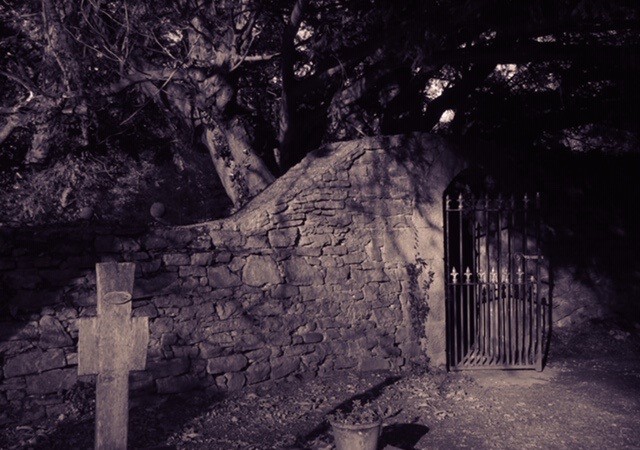 When a friend alerted me to a three-day conference entitled ‘Liturgy and Art’ that was to take place at the Abbey in November 2019, the decision to attend was already in its place. On the second day while attentively listening to Sir Richard Temple offering a presentation entitled ‘Born of the Virgin Mary, A study of Esoteric Christianity’, I was lifted into compassionate timelessness, and with my maternal grandmother before me, witnessed a space between two worlds, a circling, recognising what was sensed all those years before.

Such are the levels and the lives from on high to the darkness cave; the tears, the suffering, eternal joys of sorrow enshrined in the Icon and the ancient Liturgy, and in the mystery of transpersonal crossing points, within which may be heard the call to participate in life rather than the illusion of life.1