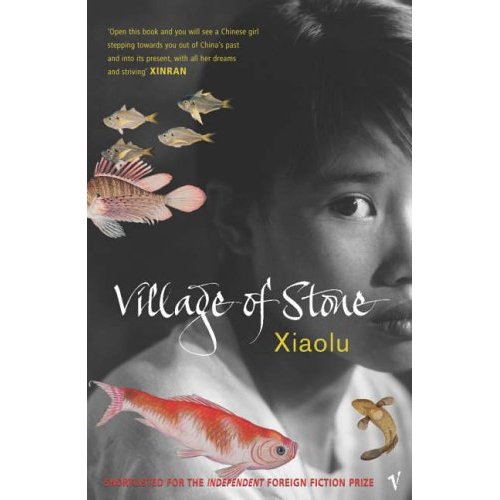 This short novel opens with the following lines:

“I see myself on a boat, steering far out to sea, to the seas of the Village of Stone, and as the waves grow clearer in my memory, I find myself moving farther away from this enormous city, from these enormous buildings and crowds …”

Coral is a twenty-eight year woman who lives with her boyfriend, Red, in a small flat on the ground floor of a noisy twenty-five story building “in the enormous, parched megalopolis that is Beijing.” Coral works in a video rental shop while Red, who is at the age that Confucius recommended for settling down, is financially supported by his parents and has a passion for frisbees.

Both are disaffected and unfulfilled and their fragile state is further disturbed by the arrival of a parcel of a large, dried, salted marine eel posted from an unknown address in the Village of Stone where Coral lived her earlier years.

The smell of the fish, which they store away in the fridge, permeates their home and that of a neighbour whose daughter makes perfume. Through associations, Coral is transported back to the place of her childhood, set beside the ever-moving sea with its essential life that provided food and a way of living for the villagers.

Her childhood was traumatic, dominated by solitude, fear and shame. Born on a boat during a violent storm, and orphaned soon after, Coral was raised by aging grandparents who refused to speak to each other, and lived amongst people who were severe and superstitious, shunning both her and her grandmother, for they were outsiders. They had not been born into such a closed off society. The outside world was over the mountains; even the communist party was a faint edifice and set far way. Coral eventually leaves the village with its dark undertones when she is fifteen.

The narrative flows between the life she now lives in Beijing and the rhythms of the old coastal village. Then one day an aged, sick man appears at Coral’s door. He claims to be her father, the past and present converge, and she is compelled to face the secrets of her past in order to let them go so that she can move on.

There is a good deal about this book that is both poetic and lyrical, at times haunting, sad, and yet infused with a gentle penetrating humour. Although the quality of the writing falters at times, nonetheless this is a fine, interesting novel that offers insights into the feelings of a young woman, views of modern China, its people and the divide that exists between the rural and urban population in this vast diverse country.