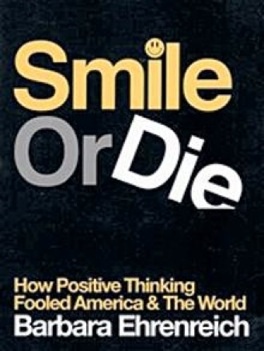 How Positive Thinking Fooled America and The World

This book opens with a simple sentence: ‘Americans are a “positive” people’, the author then sets about exploring how this view has taken root in the minds of many people both within and outside the USA. She proffers the view that the image and the reality are quite different and contrary to what may be offered on widely viewed television programmes like Larry King Live and the Oprah Winfrey Show or by best selling books such as The Secret, the core of American positive thinking is built upon anxiety and a terrible insecurity.

The American Revolution and the resultant fledgling Republic were based on idealistic principles. Its leadership was both flawed and young, and although several of the founding fathers were not at all positive that their rebellion would be successful, they fought bravely. Barbara Ehrenreich points out, “There is a vast difference between positive thinking and existential courage.”

It was during the 19th century that the movement of positive thinking began to take hold in the USA. It was brought about through the influence of a diverse collection of individuals seeking in their own way either wealth, health or happiness, often all three. Among them was Phineas Parkhurst Quimby (considered by many to be the founder of the New Thought movement). After his death Mary Eddy Baker claimed his teachings as her own and went on to establish Christian Science. It was through another of Quimby’s disciples, Annetta Dresser, that William James came to be influenced and subsequently wrote enthusiastically about the benefits of the New Thought approach to healing in The Varieties of Religious Experience. “To James, it did not matter that New Thought was a philosophical muddle; it worked.”

The essence of Quimby’s healing method is that the universe is fundamentally benevolent, that there is ‘One Mind’ out of which it came into being, that humans are a part of that ‘One’ and can ‘leverage their own powers of mind to cure or “correct” their life.’

The author was drawn to examine the history of how positive thinking reached such dominance in the USA as a result of her own diagnosis with cancer. ‘Breast cancer, I can now report, did not make me stronger, more feminine or spiritual. What it gave me, if you want to call this a “gift,” was a very personal, agonizing encounter with an ideological force in American culture that I had not been aware of before—one that encourages us to deny reality, submit cheerfully to misfortune, and blame only ourselves for our fate.’

The book has a journalistic approach and as a result lacks depth of questioning; however it does offer some valid criticisms of the multi-billion dollar positive-think-industry and its influence on health, religion, politics and business. Whereas the ‘power of positive thinking’, may work for a while for some, it is like a Ponzi scheme, fundamentally unstable, based as it is on a sort of wish fulfillment, one- sided affirmation and denial of anything ‘negative’.