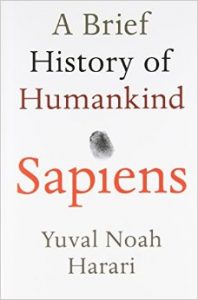 Reflections on the book by Yuval Noah Harari

Harari’s book is already a bestseller and has had many reviews. This is not a review, but an attempt to summarise the impressions the book has made on me. Harari’s aim is to provide an overview of the whole of human history, one which identifies unifying themes. To do this, he has to go back to the very beginning, to the point, some 70,000 years ago, when Homo sapiens became something fundamentally new. He uses the word ‘Sapiens’ instead of ‘human’ in order to emphasise that, at that time, there were other species of humans around, who did not undergo the dramatic transformation that occurred to our ancestors. Despite their cleverness – Neanderthals had bigger brains than ours – they remained essentially animals in a way that we didn’t.

When we ceased to be just another animal, there was a parting of the ways: in some strange way we woke up and fell asleep at the same time. Scientists call this moment ‘the cognitive revolution’. From then on, people’s lives started to be suffused by imagination – more and more of our experience of life came to be mediated by what we imagine. This power of imagination, the capacity to plan, design, tell stories, to speak in metaphors and symbols, is a powerful servant; it gives us unprecedented possibilities to manipulate the world around us. The source of its power, according to Harari, is that it enables people to imagine things collectively and then to act as though they existed. Gods, nations, laws, institutions, rights and obligations – none of them have any independent physical existence; they only exist in people’s heads. But, because they exist in many people’s heads, they have a real effect on the world. It is by means of these ‘imagined realities’ that humans like us cooperate and communicate. This imagined world has become the inescapable intermediary between us and reality; it is the unavoidable means by which we relate, not just to the physical world, but to each other and even to ourselves.

Whatever brought about this change, it left no trace in any fossil skeletons. Scientists speculate that it must have involved some change to the wiring of the brain. Harari calls it ‘the Tree of Knowledge mutation’. If you are wondering why this is an appropriate phrase, have a look at Kleist’s essay on the Marionette Theatre and read what he has to say about the third chapter of Genesis.

People with this new power of imagination spread rapidly around the world. They had the amazing capacity to get used to anything and to invent ways of finding food and shelter in many different environments. But they didn’t have a big plan – they just spread from place to place and thought up ways to get what they wanted.

But they nevertheless had a big impact on their surroundings. This was especially so whenever they entered virgin territory which had never encountered other human species. This first happened 45,000 years ago, when the most technically advanced people of that time, who already knew how to cross hundreds of miles of open sea, discovered Australia. Within a few centuries they had exterminated most of the continent’s large animals and had drastically altered the landscape. This wasn’t an orgy of reckless destruction – the animals were just too easy to hunt, so it made sense to go after them. Every generation, the game might have been a little bit rarer than the old people remembered but no one would guess they were heading for extinction. Many millennia later, the same thing happened in the Americas.

Dramatic though these ecological effects were, they were dwarfed by the consequences of the next big change – the agricultural revolution. Yet again, there was no plan, just a gradual shift through many small increments. The result, after many generations, was that people whose ancestors had been foragers now lived by farming. For most people – everyone except the new elites – this meant on balance a harder, less satisfying life. If this sounds surprising, remember that this was subsistence farming without metal tools, ploughs or even, for the first few millennia, draught animals. It involved hard physical labour, of a kind for which human bodies had not been shaped by evolution, a less varied and nutritious diet, exposure to diseases transmitted by livestock and the constant fear of famine. Once the shift had taken place, however, it was irreversible. Going back to the foraging lifestyle was not only impractical, chiefly because farming supports much higher populations, it was literally inconceivable. People now lived by the values and norms of farmers, not foragers. Farming was ‘natural’ and foraging was alien. The only way back was by equally gradual increments under pressure of circumstances. This did actually happen to some isolated populations in conditions which became unsuitable for farming, but the general trend was not in that direction.

Instead, the trend was towards more people, living in bigger groups and ruled over by kings supported by hierarchies of priests, warriors and bureaucrats. Over the ensuing millennia, human linguistic and cultural diversity began to be ironed out as communities became tied together over ever greater distances, first by trade and then by a new idea that emerged between two and three thousand years ago: empires. Empires really got going in the subsequent millennium and, over the past 2,500 years, most people have been citizens of one empire or another.

The time when empires were hitting their stride also saw the emergence of new, more potent ‘imagined orders’. These included the new ‘universal’ religions – Buddhism, Zoroastrianism, Christianity and Islam – and, most Protean of all, money.

In discussing the new religions which emerged about that time, Harari pays especially close attention to Buddhism, in which he evidently has a profound and serious interest. If our desires arise from our imagined realities, then, given that the central insight of Buddhism is that suffering arises from desire and that true liberation means liberation from desire, its relevance is readily apparent.

As for money, which massively increased the volume and importance of trade, its imagined nature has been repeatedly commented on. Money’s power relies on the shared belief that other people will accept it in exchange for whatever you might want to buy from them. So long as that belief persists, money can link communities which have nothing else in common.

The most recent of the big revolutions started four or five centuries ago. Harari argues that this last revolution had three facets which were inextricably linked: science, capitalism and imperialism. And the idea that tied them all together was ‘progress’.

Progress is another ‘imagined reality’. Like law and money, it ‘works’ – and it really does work – because people believe in it. Without a belief in progress it makes no sense to invest in new inventions, voyages of exploration and so on. Belief in progress implies not just a confidence that the future will be better – whatever that means – but that putting your money on the future is a good bet.

There is no doubt that progress ‘works’ in the sense that it has delivered unprecedented comfort and security for equally unprecedented numbers of people, but the picture is much less rosy if you include the effects on non-human species. In one of his telling phrases, Harari suggests that modern agriculture ‘may turn out to be the biggest crime in history’. There is also the question of whether it makes people happier. Here the findings of modern science undermine the basic assumptions of consumerism: your average level of happiness is biologically programmed. We each have a kind of happiness thermostat which stops us from feeling too happy or too sad for too long. This is evidently part of the secret of our species’ amazing adaptability, but it relies on the assumption that happiness is identical with the kinds of ‘pleasure’ which can be associated with chemical processes in the brain. But this assumption is itself undermined when researchers look at what determines people’s overall, long-term, happiness. What counts here is, unsurprisingly, whatever gives their lives meaning – what they feel they live for. This is perhaps why the ‘Brave New World’ idea, in which we are all dosed with happiness chemicals, is so repellent to most people.

Progress relies on a collective belief in the possibility and desirability of ever more manipulation of the external world. It also relies on continuously unsatisfied desires. But these desires are not innate, they too are part of our ‘imagined order’. So, sooner or later the question has to arise – what’s it all for? ‘Progress’ drives us more and more to manipulate not just our surroundings but even ourselves. This began with technological means to overcome physical impairments, many of which, like glasses or hearing aids, are now so commonplace that we think nothing of them. More recently, these ‘repairs’ have extended to artificial limbs and organs, heart pacemakers and so on. Increasingly, however, these modifications are not repairs but ‘improvements’. Cosmetic surgery and even sex-change operations will soon look laughably primitive compared with the ‘enhancements’ which are promised in the very near future. But all the while we implicitly assume that what we are manipulating is still in some way external to ourselves. If a man decides that he can only be happy if he turns into a woman, he has no doubt that after the operation ‘she’ will still be the same person, that behind all the changes there will remain the same continuous self, for whose sake all this is being done, the one who says ‘I’. Here the relevance of Harari’s comments on Buddhism becomes even more apparent.

Harari foresees a near future in which all these technological ‘improvements’ will produce a new kind of human, for whom all of our values and desires – everything, in short, which has impelled us to create him – will be irrelevant. These humans will have ‘godlike’ powers (like most modern writers, Harari thinks of the ancient gods as resembling comic-book superheroes) but to what end? It is an unappealing prospect, which is perhaps why I have been in no rush to read his new book ‘Homo Deus: a Brief History of the Future’. Sapiens ends with another of his telling phrases: ‘Is there anything more dangerous than dissatisfied and irresponsible gods who don’t know what they want?’.