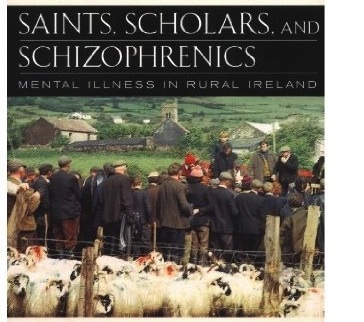 This book is a study of social conditions in the most Irish part of Ireland, the rural West. It left a strong impression on me when I first read it in 1980, the year that I returned for a few months to the grey, climatic shock of dirty streets, wounded, intricate social relationships and the haunting beauty that make up so much of contemporary Ireland’s transient passage, both rural and urban. It rained a great deal that year. I stayed in a small cottage in the rural countryside and felt very much alone as I walked along small roads, by rivers, across wet fields, and over green hills, searching, seeking to reach through my own shaded memories a place that was alight and immemorial.

Recently I heard that “the the book’s author, Nancy Scheiper–Hughes, is as passionate as ever about ‘peace time crimes’ especially those inflicted upon people with mental health issues”. ‘Crimes’is an odd phrase but touches on something that for me, at least, is real. How can a society in which a sense of community has been lost and which has become fundamentally unbalanced, adequately treat anyone who is suffering from mental illness?

When I had a breakdown (so called) while living in Australia, I experienced a fervid apprehension that allopathic doctors would reach me first. There was a deeply felt dread of that. I innately knew–given the level of understanding of many of them, what they would do and sensed quite clearly that if one drug, sedative or otherwise, was placed in my body, a necessary process which had commenced would be damaged. I felt that if so I could be left stranded, maybe truly deranged, for I sensed the life that I was being called to live was no longer compatible with the life that I had been living. In such a situation, one might wish to have the support of a mature Jung, Laing, Reich, or one such as Edward Podvoll who would hold you in their arms and “stand at the door of whatever feeling, dread, or emotion it is and listen or just be… and pay active attention,” but alas it is not always so.

In some ways the treatment of what we term mental illness is as askew today as it was when One Flew Over the Cuckoo’s Nest was made. The movie is near enough in its portrayal and not just in the fact that it was filmed in a ‘mental’ hospital with some of the actors struggling with their own shrunken views about sanity. I heard Thomas Szasz once respond to a group of psychiatrists who were hostile to his views, “I know about you – when someone talks to God, you call it prayer, but if God talks back, you call it madness”. I have since learned (and not from a book) that no illness can be truly and comprehensively treated without an opening to the sacred. Institutional allopathic medicine has for the most part lost sight of the Healer, is fearful of death (seen as something to be conquered, thus such language as the ‘war’ against cancer), and unfortunately but understandably, given modern economics, is locked inside the profit margins of the pharmaceutical companies.

In Ireland I slept in a borrowed car some stormy nights in the little village of An Clochán, out towards the western edge of the Dingle Peninsula on which the anthropological fieldwork for Saints, Scholars and Schizophrenics is based. Whereas Schepher–Hughes may have started as an observer, she ended up as a keener, lamenting a land which had lost its soul…

I have recommended the book over the years, for I found it an accurate recording of mental illness in rural Ireland. Indeed, it is now relevant in just about any part of the world where members of old, broken societies cocoon themselves desperately in fearful, life debasing abuse of alcohol or its equivalent, and many hang gutted in the oft-times feverish existence called schizophrenia.

Note – the ‘keen’ was a form of lamentation which survived in some of the remoter parts of the Gaelic speaking areas into the first half of 20th century.