There was a steep climb from the hotel up a narrow winding street to the top of the hill to reach the abbey. Only when the climb was over and we arrived in front of the west end was the cathedral-like scale of the building realised. The outside of the church is totally without ornamentation, except for the west front with it’s intricate stone carvings around the main door and a number of statues.

Entering the church from the west end there was an immediate surprise. We found ourselves in an enormous vaulted porch or narthex that was quite dark. Facing east we were confronted by a stunningly beautiful Romanesque portal with exquisite carvings that were barely discernible in the dim light. In the central arch there were many figures that I could not make out clearly but the twelve signs of the zodiac were unmistakeable. I had the impression that this was a “universal” doorway, welcoming all types towards something. On passing through the narthex, there was a visual shock of an enormous nave, and a gradation of light towards the choir and chantry chapels that were swathed in light. This use of the transition from darkness to light coupled with the harmonious proportions of the church created a very strong impression and an inner resonance that was amplified by an extraordinary silence within the building.

As I walked along the nave, I noticed the hundreds of capital stone carvings on the pillars. The quality of the workmanship and clarity of the images was astonishing – although over 800 years old they looked new. Some of these clearly referred to biblical stories, but others appeared to have a more subtle meaning. One carving in particular stood out. Two standing figures with their arms towards each other, and in between a smaller figure, perhaps a child with a halo around it. A third adult figure supported the “child” from below. The crypt was beautiful in it’s simplicity, and the silence was especially strong here – the heart and support of the building.

We were fortunate enough to witness evening Mass sung by a community of nuns and monks who live at Vezelay. To hear that wonderful relaxed and reverent singing was deeply moving, and one could sense the genuine effort of the celebrants in their search.

I came away from Vezelay feeling humbled, and desperate to return. But above all it was a reminder – that man can create buildings that activate and support an inner questioning. On my return to England, a friend passed me an observation from the fourth volume of Kathleen Raine’s autobiography:

“How the monks who built our cathedrals prayed before they were built, we tend not to enquire, or to remember that their builders did not have these great soul-inspiring churches until their own vision and skill had created them. We too much admire the product, not the vision; it has become ‘art’ for us, but for those builders their art had no ‘history’. It came from another world”.

Carving on a capital at Vezelay 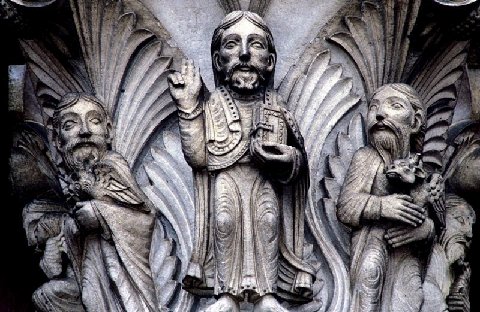