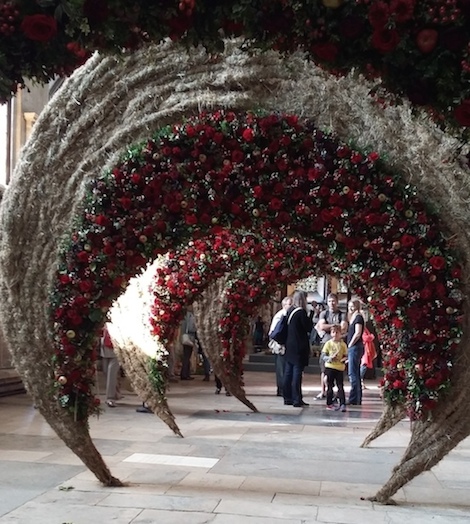 This flower festival was the concluding event held in Salisbury this year to commemorate the eight hundredth anniversary of the signing of the Magna Carta at Runnymede. Salisbury Cathedral has held one of four original Magna Carta documents since 1215. It was brought here by Elias De Dereham, who as the Archbishop of Canterbury’s steward was responsible for distributing the document around England after it was signed by King John. He was also a master stonemason and the architect of the cathedral, overseeing the main phase of building from 1220 to 1258. The aim of the Magna Carta was to place the law above the king, guarantee justice for all “freemen” and the freedom of the Church. Four of its clauses are still held in English law today. The most memorable of these is: “to no one will we sell, deny or delay right or justice.” Having lived in Salisbury for the last nine years, we have regularly visited the cathedral and seen the single page of beautifully hand-written abbreviated Latin. But this exhibition really brought the meaning and significance of the document to life.

Different aspects of the Magna Carta, including a number of the clauses were represented through the entire cathedral building, with elaborate, neutrally coloured background sculptures which accentuated the rich variety of flower colours. The care with which the displays were assembled and the contrast between the depiction of chaos before the document was signed with the relative order that arose afterwards created a deep impression. One surprising and welcome element was an interactive light display of letters and words from the Magna Carta which changed to form new words from the document when anyone either touched the display on the wall or stepped into the projection beam. The viewer was, for a moment asked to reflect on the meaning of the word or words that were assembled. One part of the exhibition included some terracotta tiles with the theme of personal freedom, produced by inmates of a local prison, alongside a film display of great leaders who had to fight for their own personal freedom and strive for the freedom of their people.

There were several thousand people walking around the cathedral when a priest invited everyone to listen to a prayer. Everyone stopped.