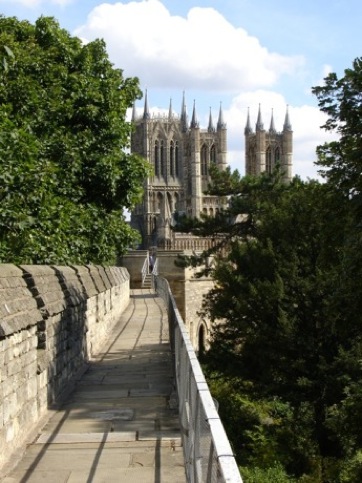 Ever since my history-loving parents showed my sisters and I a number of the English medieval cathedrals in our early childhood, the impression of these majestic buildings has remained with me. There was, and still is, a sense of wonder that man can create such beautiful, harmonious buildings that have defied centuries of conflict to remain as symbols of – well symbols of what exactly?

When I was 10, I joined a secondary school whose school choir sang at a different cathedral each Easter whilst the resident cathedral choir were on holiday. The first “cathedral course” that I participated in was at York Minster. We sang for a minimum of 6 hours every day in rehearsals, followed by at least one service in the Cathedral. It was very demanding, because we had to learn a large number of difficult pieces within a short period. I will never forget the first time we assembled in the vast choir stalls in the Minster and began to sing. The two sides of the choir, decani and cantoris were so far apart that to really sing together in time required a high degree of listening and concentration. There were moments though, palpable to all of us, when there was a greater degree of listening and quite naturally, the sound was more whole. Above and around us, the delicately resonating Minster provided a supporting backdrop for the thirty five singers to find their place. When we stopped, there was a 14 second echo that gently faded into a profoundly receptive silence. 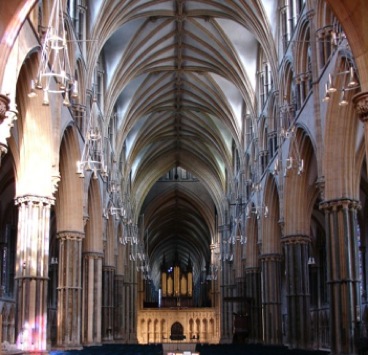 Over the next few years, we sang in a number of cathedrals, including Peterborough, Lincoln, Exeter, Winchester, Chester, Llandaff and Canterbury. There was a tradition on these courses that the choir would have one rehearsal in the cathedral late in the evening when there was no access to the public. The choirmaster would allow two or three of us at a time to leave the choir for a few minutes and walk around whilst listening to the other members of the choir singing. To this day, I am eternally grateful to the choirmaster for his generosity of spirit in doing this. To walk in the quiet semi-darkness in those vast ancient buildings, undisturbed by the chatter of hundreds of visitors, whilst listening to the music made a profound impression on all of us. It conveyed directly how such buildings, assisted by music, can lift us to another level. And yet there was no “doctrine” attached to these experiences.

Ten years later, I sang in York Minster again, this time as part of the Leeds University Chamber Choir. I was then 21, and in the midst of trying to come to terms with the adult world. It was as though I’d never been away. The impression created by the light constantly changing through the stained glass windows was again very clear, and that constant receptive silence was still discernible. A new impression of cathedrals became apparent from this experience – that they represented a more timeless quality. We change and grow older, but they represent something on an altogether greater scale than individual human beings. 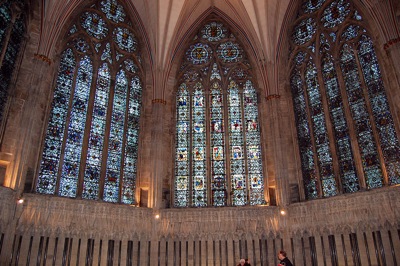 Another twenty four years have passed since we sang the final “Amen” of the Rose Responses and heard the echoes of the music fade into the stone at York Minster. I subsequently trained as a scientist, which helped me to develop some useful techniques in learning how to approach problems rigorously. However, I have never been able to reconcile this training, which tacitly assumes that everything (and everyone) is on one level of consciousness, with those experiences over the years from my choir-singing days and other events in my life, including the death of my sister at the age of 25. These experiences have developed an inner conviction that there are qualitatively different levels within us that have different kinds of consciousness and understanding. Moments of greater understanding come from making an elusive connection between thought, feeling and the physical body. This can sometimes happen by accident when an individual receives a sudden shock, such as the unexpected death of a close relative. The sight of cathedrals would have been a large shock for the visual senses (the sense that we make the most use of) in the Middle Ages, for people who were used to living in very simple wooden buildings.

Two years ago our family moved to Salisbury. I had visited the cathedral years before and had been struck by its internal simplicity. Having visited it a few more times since, at different times of the day and night, I am now awestruck by the vision of the builders. Almost uniquely for an English cathedral, it is built in one style (Early English). The preternaturally graceful spire, which at 404 feet high is the tallest in Britain, can be seen for miles from every approach road and valley into Salisbury. The cathedral was and still is a beacon for those who live and work in the area, and such is it’s beauty that not one other tall building has been allowed within the city over the last 750 years. 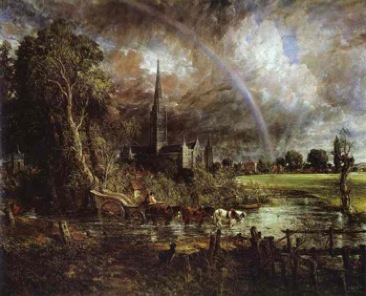 Our family has visited many of the other English cathedrals in the intervening time, including, Durham, Ely, and Wells, as well as a number of Abbeys such as Tewkesbury and Romsey. One could ask the question – why were these great cathedrals built on such an epic scale? Was it just plain egotism on the part of the Bishops and clergy to create ever larger, more beautiful cathedrals to overawe and subdue the masses? Undoubtedly there were wealthy patrons, who are known to have contributed towards the buildings, and perhaps a large number undertook this work to improve their position in society. It is also true that the Church suffered from widespread corruption in the Middle Ages, and under the banner of religion, acts of unspeakable barbarism were perpetrated against many innocent people across Europe.

In spite of all of this – and perhaps it is a hopelessly naïve thought, I subscribe to the view that the Cathedral designers were trying to make people look up, outwardly and inwardly, towards a different level of life that is possible whatever human activity is being undertaken. If you visit these beautiful buildings at quiet times, there can be a palpable sense of being lifted inside, and a gentle encouragement – inspired by the sense of harmonic space and colours, to set aside one’s own problems and just try to be. In Lincoln cathedral, we found a chapel where the sense of prayer was overwhelming – a touching legacy of people’s efforts over many centuries, and a reminder of how it is possible for people to leave a lasting influence.

Were cathedrals also used for sacred dances – to connect the body with thought and feeling in an act of supplication or prayer? There was a tradition of dancing in Chartres Cathedral, but there are no clear records of this happening in England. There are however, some clues – for example the instruction to turn to face East during the recitation of the Creed in the Evensong Service and to bow the head on certain words of the services. The power of cathedrals to evoke deep impressions, especially when conjoined with music, will stay with me until my last breath. They are a legacy which we do not clearly understand but must protect – a legacy which understood the need for the physical body, reason and emotional intelligence to join together. Perhaps this legacy can be rediscovered again.