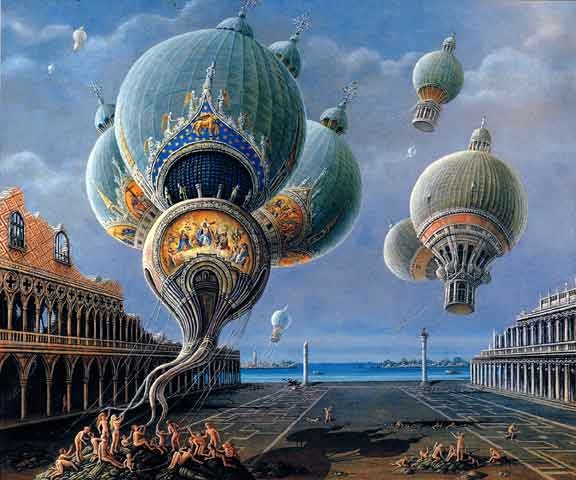 ‘Flight of the Churches. Venice’

When I worked on this painting, the idea came as a mystery, a sort of puzzle that needed to be solved. I knew that I must be prepared to make several false starts before the right image began to take shape. Strangely, I always know when I am going wrong with a fantasy picture, but I am never absolutely sure I am going right, until at last something seems to be going in the right direction, which tells you more about your idea than you had known up until then.

As Wilde’s Lady Bracknell said: “I don’t know what I mean until I hear what I say.”

Painting The Flight of the Churches was like going on a personal journey. I worked on a fairly large gesso panel. I began with painting a ground  of umber and red, and swirled the paint around with my fingers. The shapes of the balloons seemed to form themselves, and I wondered what they were. Then I suddenly saw St. Mark’s Square in Venice, and realised that this was St. Mark’s Cathedral floating away. I got hold of a photograph of St. Mark’s Cathedral, and by holding a silver Christmas tree ornament to it, I saw in the reflection how to paint it in the round. I painted the cathedral as a series of balloons, with long streamers, like umbilical cords. I achieved a beautiful transparent look with the colours by painting the cathedral with white underpainting and adding the colours as glazes on top. I used soft colours such as Naples yellow, rose doré, cerulean blue, and a mixture of monestial green, azure blue and yellow ochre for the domes.

Then I realised that if St. Mark’s was floating away, probably other churches were floating away, too. I did some photographic research, and found other Venetian churches to turn into balloons. I painted them against a light blue sky — cerulean with lemon yellow near the horizon, and with ultramarine near the top to make the kind of sky that you often see in Venice.

In order to add a little drama, I added clouds made with titanium white, permanent rose and Payne’s grey. The next thing that occurred to me was that if the churches had all left the ground, the place must look a mess, so perhaps there had been some kind of disaster. Referring to a photograph of St. Marks Square, I began to paint the disaster. By breaking off the corners of the buildings at either side, I achieved a very powerful line of perspective. The buildings were added using white underpainting and Indian red and permanent rose as glazes on top. Then I made holes in the ground of the square for people to crawl out of, but I couldn’t picture how they should be dressed. Finally, I decided that they wouldn’t wear anything. Maybe after a disaster like this they had lost their clothes!

The next problem was the shadow of the balloons on the ground. In order to be convincing, a fantasy must conform to the ordinary laws of the world. As C. S. Lewis wrote: “A myth must have the inner consistency of reality.” Unless my shadows were convincing, the whole painting would lack conviction.

Renaissance artists used to make tiny models in their studios and use them to work out by analogy how things would look in the real world. So I collected various scraps, some wax, toothpicks and plasticine, and made a tiny model of the balloons. Then I took a strong lamp and held it near the model. The shadow of the balloons was perfect, and completely different from anything I could have imagined. I took a photograph, and when I painted the shadows in the picture it took on a new feeling of reality.

Meanwhile, I had been struggling with the colours. Often, paintings of a dream or nightmare are most effective if painted in nightmare colours.  But as this was a painting about Venice, my colours were soft Venetian pinks, greens and blues. I debated whether to change things but judged that I could get away with the same colours. Nevertheless, the painting still needed one strong accent of colour. So I made the water a bright turquoise, using monestial turquoise as a glaze. This seemed to bring the whole picture together and it also emphasised the water element which is such a huge part of Venice.

When the picture was finished people asked me what it meant. I don’t know; if you do know, what is the point of painting a fantasy picture in the first place?